Tradition… We all know that quilts traditionally were made by hand. Hand-piecing and hand-quilting, our great-grandmothers labored over every stitch. Though we enjoy the speed and convenience of our sewing machines, those are luxuries our predecessors could barely imagine.

In truth, quilts have been pieced by machine as long as sewing machines have been available to home sewers. With Isaac Singer’s 1851 patent of a lock-stitch machine with presser foot, horizontal feed, and a treadle, sewing machines became useful at home. They became affordable with innovative purchase options such as payment plans and use of trade-ins.

(Singer is not the only inventor who contributed to early machine development. See the wiki entry on history of machines. If you care at all about quilting history, you’ll find it fascinating.)

Besides piecing, machine-quilting has a long history.

U.S. Patent Office records are full of home machine quilting frames dating almost from the time sewing machines were first in home use, and many modern systems look very much like their 19th century forebears.

By the end of the Civil War, sewing machines were entering homes at the rate of 20,000 per year; in 1871 Singer sold an amazing 180,000 machines. Mrs. Augusta Hoover received the first U.S. patent for a machine quilting frame. Its description as an “improvement” suggests that it was not the first of its kind. Like most of the systems that followed, it consisted of a two-bar, ratchet-geared roller frame that held the quilt taut. (A comparable modern example would be the John Flynn system.) The frame then slid along tracks attached to the bed of the sewing machine like the carriage of a typewriter. As the user operated the sewing machine, the frame would move along the track, allowing perfectly straight, parallel lines to be quilted.

By 1877 J.J. Crall decided it should be the machine, not the frame, that moved; his system will be recognized by modern quilters as the precursor to today’s longarm quilting system. Just as today, the machine sits on a platform which moves along a track underneath the quilt. But only parallel lines could be quilted, and since the electric sewing machine was still decades in the future, a handcrank on the platform operated the sewing machine and moved the machine along the quilt in its frame.

It’s an amazing look at our past.

Yes, we quilt by machine. And when our ancestors could afford it, so did they. Did you ever wonder how your sewing machine actually works?

Earliest sewing machines used a chain stitch process. It was weak and and the stitches unraveled, more like a knitting stitch than sewing. Elias Howe and others, including Singer, developed the lock-stitch. It used two threads rather than one, similar to the weaving process Howe saw when he worked in the mills in Lowell, Massachusetts.

This video from DSN Animation shows how the lock-stitch process works on today’s machines:

A typical domestic sewing machine can complete 800-1,000 stitches a minute or more. Sophisticated machinery drives these steps. A wonderful article from HowStuffWorks explains in far more detail than I can. This drawing from page 3 shows the guts of the machine. PLEASE CLICK ON THE LINK for amazing animation on the “click to zoom” boxes. 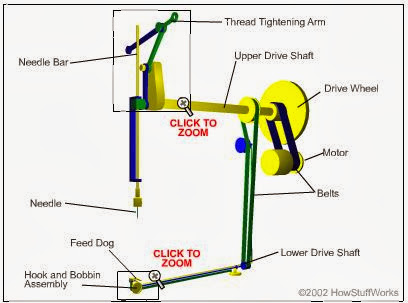 Hand-sewing and hand-quilting have their own pleasures. But they are one way, not the “right” way to create quilts. Our foremothers (and some forefathers) used sewing machines in their quilting more than 150 years ago. We carry on the tradition as we use machines, too.

4 thoughts on “A Stitch in Time”