Some people say that the key to happiness is having lower expectations. Yesterday I had incredibly low expectations for myself and managed to beat them, which made me happy. So I guess it’s true!

Beyond going to the gym and doing a small amount of housework (emphasis on “small,”) I also learned a new skill that will help with an upcoming project.

My project will use an airplane in the center block. For a long time I figured to appliqué something, but recently I decided I’d rather piece it for better durability and so there isn’t the stiffness or chemicals of fusible web in the quilt. Hmm, piecing an airplane? That sounds like a job for paper piecing!

I have done paper piecing, and I’ve drawn my own papers for it, but they were quite simple. An airplane is more complex that a border of triangles. A search for available patterns didn’t coming up with the specific airplane I want, and I figured I’d need to draw my own. My next search was for tips on designing your own foundation patterns. Low and behold, I found the video at this link. It shows the steps to use in EQ7 for creating a paper-piecing pattern. (It couldn’t be embedded, so if you want to see it, you need to click the link.)

I have EQ8 software, but was able to “translate” the instructions to the current version. It helps to both slow down the speed of play and stop it regularly, to catch up to directions. I learned how to import an image into the block design worktable, and then use the drawing tool to simplify the image as a pieced block. The video then showed how to prepare the pattern for printing. It was so much easier than I could have imagined!

Here is my block, colored as if it were in fabric.

And here it is with the seam lines drawn in.

The software then separates and numbers the patches for the pattern. It is SO COOL.

Can I manage to keep my expectations or ambitions in check? Maybe not. Here is a list of things I have queued up:
* Finish quilting the rooster collage applique; bind and label it.
* Make the back for my Wind River Beauty project; load it, quilt it, bind and label it.
* Make and attach a label for a neighbor’s baby quilt, now that the baby has been born and has a name.
* Try creating the airplane block as above. If it works, move the rest of the project along.

I always think I can achieve more in any time frame than I really can. That might be optimism, and I haven’t unlearned it after all these years. It can make me feel a little disappointed and stressed when things don’t go as planned. But deliberately setting low expectations for a few days gives me permission to take my time, recapture pleasure, and look forward to the next steps. That’s the key…

It was another rough news week, wasn’t it? Between threats of nuclear war with North Korea, the possibility of invading Venezuela (and WHY?? I keep up pretty well and haven’t been able to figure this one out,) and the disgusting display of American Naziism in Virginia over the weekend, I’ve practiced distraction a lot.

I’ve been quilting my big 6-pointed star quilt in pink and brown, too. I posted a handful of pix in Instagram, but nothing here. I have it about 75% done, but it is now off the frame, as I’ll turn it to do the last two sides. (Because I’m doing “custom” quilting, and treating each section differently, the borders are easier to do in one pass. If I turn the quilt 90°, I can do the sides that way, rather  than in pieces as the quilt rolls from one end to the other. If you didn’t understand what I just said, don’t worry… 🙂 )

Besides that, I’ve been thinking about my upcoming class. I will make one quilt to feature in the shop’s marketing. I’ll also make two quilts along with my students. But I also will draw several more, to show them examples of how they might use simple blocks and unpieced borders to create an intricate design.

Here are a few. All of them will create a quilt finishing 60″ square. The center block for each is the same size, and the border widths are the same sizes. They all use the same blueprint.

I’ll start with a re-do of the white and bright one from the other post. This preserves the flavor but simplifies it quite a bit.

Next are two that also use spacer blocks in the final border.

And two more that have more traditional block placement in the final border.

These were fun to create, and served well to keep my mind off some less happy topics.

Last time I showed you a couple of ideas for finishing the 6-pointed star with borders. Both were good ideas, and I kept playing in EQ7 to refine them. This was the winner:

Pretty, huh? I liked the airy way the chains of 4-patches wrapped around the center. After arriving home over the weekend, I set to work making 40 double-4-patches to construct the borders. They finished well, and I was excited to lay them out around the center. But I don’t like the look at all. They definitely look better in the drawing than they do in real life.

The balance is all wrong. The visual weight of the center (everything in the center so far, including the 4-patches on point and the 1″ dark pink border outside of them) is too heavy, relative to the weight of the chains. The difference is so stark, the border chain blocks seem completely disconnected from the center, as if they are from different quilts.

Unity: the design principle that all the elements and components of a design look like they belong, that they are unified, or one.

Balance: the design principle that elements and components of a design have equal distribution of visual weight.

My chains are not well balanced with the center, and in fact, are so badly balanced as to look like they don’t belong.

So it was back to the literal drawing board of EQ7. I have a tentative plan, but you might understand that I’m shy about showing it right now. First I’ll see if it works.

How is your week going? Are you making good progress, or are you in steps-forward and steps-back mode, like I am?

Where I left you last time was having solved the problem of setting the star points into background fabric without using Y-seams. I also showed you an idea for a quilt design using log cabin blocks. It’s pretty, but I really have no interest in making it.

This is where it is so far. At this point it finishes at 54″ square.

The question is, what to do next? Often I begin a quilt with a center and two or three borders, designed in my mind and with scratch paper, and made directly. When it’s time to add more borders, I often switch to EQ7 for design help. It gives the advantage of trying out ideas without making them. With unlimited iterations possible at virtually no cost, there is not much downside. I did the same for this one.

Here are a couple of options, drawn in EQ7.

I like them both, but I have a pretty good idea which direction I’ll go with it.

I’ve often boasted about not having many UFOs (UnFinished Objects, or quilt projects that haven’t been completed.) Why that would be something to brag about, I’m not sure. But it’s true, usually I finish what I start.

There is one long-time UFO, started several years ago. 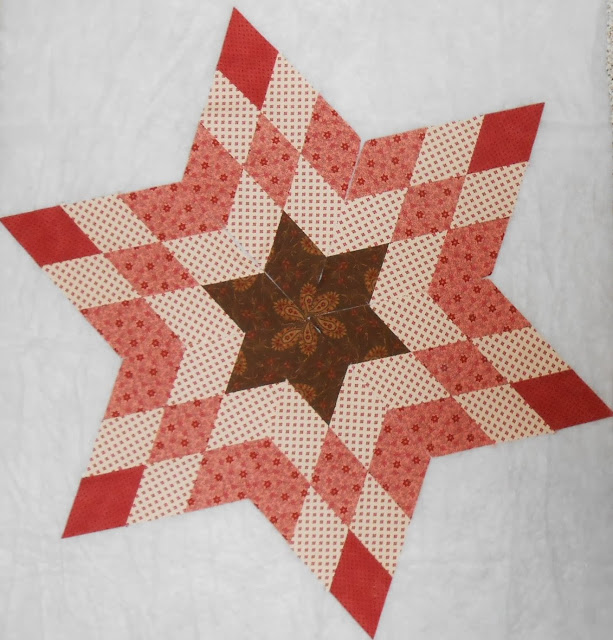 There were multiple reasons for not proceeding with this. One issue was technical — I wasn’t sure how to do the Y-seams to set the points in a background. (Above they are not sewn together, just arrayed on batting to show them.) Another was that, once set, I didn’t have a good idea of how to show them off.

Almost four years ago I posted More of an Idea than a Plan. In it I showed one option for setting these star points. Recently I got the star points out again. It turns out you can avoid using Y-seams if you extend the points with background fabric. The blue lines below illustrate the extra seams. The star block has six big segments, each consisting of a star point and two pieces of background fabric. Put together two star halves, and then stitch the long seam to create the whole block. Easy peasy.

The constraint I faced was not having quite enough background fabric. If you look again at the block above, you can see that the star itself is not the same width as height. The star points do not extend all the way to the sides. To make the block square, it requires “enough” background fabric to make the height and width equal. I didn’t have quite enough.

That gave me the next opportunity for problem solving. The easiest two ways to make a center square are to 1) trim it to square or 2) add borders to make it square. I had nowhere to trim; adding borders of different widths was the best choice.

The photo below shows my solution. To all four sides, I added borders of floral print on cream background. The top/bottom borders are narrower than the left/right borders.

The one-inch strip border in coral encloses all that and creates the illusion of uniformity. At least, for me it helps make the width differences disappear. That strip takes the center to 42″ finished.

It isn’t magic, and it isn’t mysterious. It’s just math. If I didn’t know all that and still wanted to use blocks on point, I could have made them any size and simply had them not fit perfectly. AND THAT IS OKAY!! And TRADITIONAL!!

Alrighty. This post is too long already. I’ll finish it soon with showing you a couple of options for the remainder of the quilt layout.