Now you see her, now you don’t? Yes, that’s me! Two weeks ago I opted out of my own 30-day challenge, stopping at 20 days in a row of blogging. And since then was Thanksgiving, with several days of family fun. Besides that, I’ve been trying to finish some projects — don’t know if you know this, but the end of 2017 is rolling right up! (And not a moment too soon, huh? Heckuva a year, and not all in the good way…)

Right now I have three quilts in progress. Two are from my medallion class. Christmas Is Coming! needs binding attached.

This was the worst of it, but not the last of it. After struggling with getting the tension settings improved, I decided to take the quilt off the frame and putting a testing sandwich on. Prior to taking it off, I basted all the way around the edge, and also used great big stitches to baste through the body of the quilt. The basting stabilized the piece, so layers would stay put for returning to the frame later.

My test sandwich got covered with stitching. I managed to get the top and bottom tension adjusted well, but still had intermittent messy looping areas on the back. When the tension is BAD and there is looping, it’s because the tension is bad. When the tension is GOOD and there’s looping, it’s often because the thread is catching somewhere, like a rough spot in the thread path. I’ve done this long enough to know some of the places to look. (I have a long list of them, if you are interested.) I worked through all those things that I could. While it improved, it still wasn’t as good as it should be.

I called the company and spoke with the head technician. He agreed I’d done all the right things and asked me to bring the machine to the factory. Fortunately, that’s only about a half hour away from me, so I took it the same day. After two hours working with a technician, the best we could come up with was replacing an inexpensive part, the last thread guide above the eye of the needle.

Before returning to my bear’s paw project, I wanted to test it again on something small. Son’s fiancee likes seasonal decorating and I hoped to make a table runner for her for Christmas. I figured that would be a good project to test quilt. After all, if there was looping on the back, it wouldn’t matter. When used as intended, no one would see the back!

I tend to make things more, rather than less complicated. So I had to fight my instincts and make this a simple project. I made three puss-in-the-corner blocks with fussy-cut centers. (Yeah, I couldn’t go all the way to simple!) I set them on point and framed them with a border. I had a piece of appropriate fabric for the back. So I loaded it all up and quilted it.

(There is more to the story of how the quilting went and what happened next. That part of the story will come later this week.)

The last step on the table runner was the binding. I had just the right amount of just the right fabric. However, when it came to attaching it, I wasn’t sure how! All my quilts prior to this have had squared 90° corners. This also had 45° angles. Have you used them before, or other angles than 90°?

This morning I watched a video tutorial that explained how.

Here is my finished table runner.

The table runner has the edge of red binding. Underneath it is another quilt on the table.

Taking a couple of extra minutes to fussy cut the centers made these simple blocks look fancy.

Can you see the figure-8 Christmas tree stitched into this setting triangle? Another easy way to make an easy project look more intricate.

I’m off and running again. Thanks for reading! I always read comments and try to respond promptly. If I don’t get back to you soon, it’s because I’m offline. See you soon!

Last week I started working on a new table runner for a cabinet in my dining room. I have a Christmasy one and a couple that work great for fall. But I didn’t have one in brighter colors for spring and summer. We’re throwing a party this month, and I thought this was a good time to make one.

I’ve also whined to Jim oh-so-many times about not having cheerier placemats for our kitchen table. Really, who could fix that for me??? And certainly what better time to make placemats than now?

But here’s another thing: I didn’t have a plan, and I have a very hard time working without a plan. Should I design a block for the placemats? Or for the table runner? What should I make?Aaaaaaack! SO HARD! In fact, too hard. Lots of times I make things too damn hard, too complicated. This should be fun, easy. I should PLAY!

PLAY! My word of the year. So hard for me to do, which is why I need to practice that more.

I started with the table runner. Recently I’d sorted the scraps from my kaleidoscope quilt. (Still planning a post on it.) The 12 wedges that make up the star are built from strip sets. You sew together matching pairs of four to six strips, then cut shapes from the matched strip sets. The scraps from cutting the shapes are pieced from strips, too. That makes them harder to use than single-fabric scraps.

But in the spirit of PLAY, I took a rotary cutter to a couple of chunks, cutting rather perpendicular to the seams. I didn’t use a ruler so they weren’t exact. Then after wondering what the heck I’d do with those pieces, I found a fat quarter I like but have had a hard time using. (Do I say that about a lot of my fabrics?) So I cut strips from it, too. And without a plan, I built the centers for three blocks using the kaleidoscope scraps and a weird fat quarter. The block centers were different sizes once built. Then I framed the block centers with strips of another fabric, and I cut the blocks all to the same size. The frames are wonky because the centers are wonky. Narrow sashings between the blocks separated the frames. Then I bordered the whole thing with the sashing fabric.

Then I needed to make a back for the table runner. Again, I tried to make things too complicated. If it were pieced, the table runner could be two-sided. So I started pulling fabrics for a pieced back. Then I thought, no, maybe I’d make two table runners. Blech… Ultimately I cut a bunch of 5″ squares, thinking I’d just piece squares together for a second runner, and thought I’d piece a bunch more into sizes for placemats. Complicated, yes?

As I dug through things for that, I found a piece of yardage just the right size to make three placemats.

Here’s how it shakes out: I made a table runner. I pieced together a bunch of squares, which I’ll cut into two placemats. I cut a piece of wholecloth that will be three more placemats.

Then I found one of the ugliest fabrics I ever bought and used it to back all those things.

This afternoon I quilted them all. I loaded all at once on the ugly fabric, with an old piece of batting.

The wholecloth placemats are on the left, the pieced squares are in the middle, and the table runner with wonky blocks is on the right.

Binding still to come, but otherwise I’m reasonably happy with my play time. 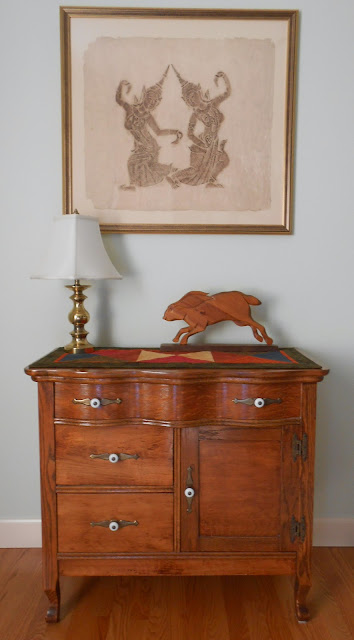 Sometimes it’s gratifying to make a small project, like a few placemats or a table runner. Early this month I finished a table runner that I haven’t shown you yet. I have a small cabinet in my dining room, which I refinished as a teenager. It is made of multiple kinds of wood. The frame is all oak, but the flat drawer fronts and the top are not. And the top is the least attractive part of the piece. I like to decorate it with a table runner.

You can’t tell the wall color from the photo, but it’s pale green. The temple rubbing is from Thailand and was my dad’s. The rabbit is hand-carved, and was a present from Jim on my birthday two days after our son was born.

If the table runner looks familiar, it should. I used leftover triangles from my Harlequin Medallion quilt.

Here are two other runners for the same cabinet. The maple leaf runner used leftover blocks. My sister Cathie sashed and quilted it for me.

Besides these, I’ve made a few others. My first table runner, and one of the first quilts I made, was this simple one for a friend. It looks simple now, but it was the first time I set blocks on point, and it took me a lot of figuring to decide how to do it.

Here is another I made for the same friend. My skills had improved quite a lot by then!

The last picture I’ll share is of a table runner I donated. I made it from an orphan piece, discarded by someone else. The hearts and center wreath were already made. I framed them with the peach narrow border and the final green border. Then I quilted it. I thought it turned out very pretty.