Jim and I have been talking about how a moment in time can change the course of one’s life. A single decision, even if it doesn’t seem momentous when made, can alter the path taken. But often that single decision is preceded by a long set of circumstances. Often that moment is not in isolation.

On May 18, 1980, an earthquake triggered the collapse of the north face of Mount St. Helens, in Washington state. Along with the avalanche, the volcano exploded with magma and poisonous gas. Fifty-seven people died; homes, bridges, and highways were destroyed. In a moment, life changed irretrievably. But that moment was hundreds of millions of years in the making. And though the general public did not receive enough warning to keep hikers off the mountain, residents began preparing to evacuate weeks ahead.

At Mount St. Helens recently. You can see the north slopes of the volcano behind us, still mostly bare of growth, 38 years after the blast.

A few weeks after the volcano erupted, Jim and I met in a university cafeteria. Far from inevitable, our meeting can be traced to a specific decision I made on a specific day two years before. Meeting Jim changed my life forever, as did the accumulation of choices I made leading to that day.

Similarly, when our son was in college, a chance encounter with the campus AFROTC commander led to his joining the Air Force, and ultimately to meeting his new bride. But neither of these “moments in time” were only a matter of chance. For our son, his decisions were bolstered by a lifelong interest in flying, as well as opportunities to investigate the options.

Long ago, a university student accused me of putting her on academic probation, based on the “D” she earned in my class. I reminded her that a single grade did not do that, and her grades were her responsibility. While the change in status may have happened at a moment in time, there was plenty of tectonic shift leading to that eruption!

Examples like these are easy, aren’t they? Some catalyst flips a switch, but the conditions for change were already in place. I’ll bet you can come up with some from your own life.

In our creative lives, some of us find our niche and continue to create similar work. Others can point to a change in circumstance, an event, or a decision, that leads to metamorphosis. Henri Matisse suffered from abdominal cancer late in his life, leading to the paper cutouts for which some of us know him best. The cancer was the catalyst, but the collage art he made was only possible because of his prior work. “Only what I created after the illness constitutes my real self: free, liberated,” Matisse said of his later work. 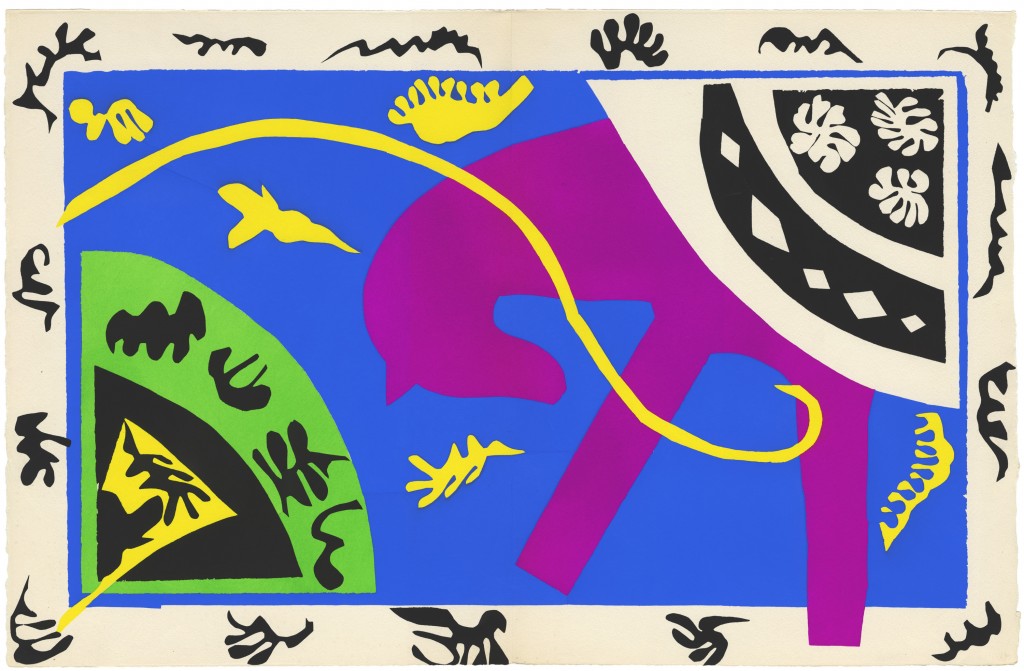 “The Horse, the Rider, and the Clown 1943-4.” Maquette for plate V of the illustrated book “Jazz.” Art by Henri Matisse/Image by Centre Pompidou

In my quilting experience, there was a moment five years ago when I decided to focus on medallion quilts. I’d made medallions before then, but I’ve made scores of them since then. Each one teaches me something new. And now I’m shifting in a direction I’ve long wanted to take, towards quilts that tell a story. The shift intensified when my friend Janet asked me to make her a Green Man quilt, a project that includes story as well as extensive appliqué.

The quilts of Mary Lou Weidman, Roberta Horton, and Faith Ringgold — storytellers I’ve long admired — inspire me, but they will not define me. My quilts cannot be like theirs; they can only be mine. The expertise in medallion quilts is not for naught. It is part of me, of my preparation.

Two of my quilts you may have seen, which I consider story quilts, are below.

I love both of these quilts, but I see them as antecedents, as preparation for what is to come. And what is to come, today I can’t fully imagine, anymore than I could imagine, 38 years ago, what my life would be like now.

Time, timing, chance, and preparation. Chance events, decisions, or circumstances can change our lives, our work, and our relationships. Everything we do helps prepare us for everything ahead.

What “moment in time” stories do you have? Has your artistic work changed because of a single event, class, or inspiration? Share in comments below.

Over the weekend I visited with my sister. She is a quilter, too, and she’s also recently retired. With her newly available time, she’s gone on a creativity tear. She quilts, she paints, she does collage, among other things. I admire how she can juggle all the various parts of her creative life.

But I’m not like that. I can’t seem to manage more than about two things at a time. Other than basic maintenance stuff, I can write, and I can quilt, and when I quilt, I usually work on only one project at a time. That works pretty well for me, but it also frustrates me. It holds me back from spending a lot of time in exploration, because that is one more thing than I can manage.

Recently I wrote this:

I would like to be both more productive and more creative. For me, those two concepts can be in conflict. To be more productive (have more quilts finished,) I could reduce the time I spend on planning and design, and choose options that are easy/quick to execute. Doing that I could finish multiple quilts a week. Some people get great joy from that, but I would not. Or, I could be more “creative,” chewing over lots of possibilities, brainstorming endlessly, drawing and redrawing designs, looking up strategies and techniques, taking classes, endlessly gazing at fabric choices online, searching for inspiration. That would take up a lot of head space and boy howdy, I’d have a lot of creative ideas going. But they wouldn’t get made. Well, that’s no good, either.

It’s the “creative” thing I don’t make time for. In particular, I’ve long wanted to improve at telling stories through my quilts, but I haven’t taken the time to learn strategies for doing so. (I’ll explain more about telling stories in another post.)

In the same post I mentioned The100DayProject. If I consider exploring storytelling as A PROJECT, as one of my two things to do, I can do that for 100 days.

My plan isn’t fully developed, but my intention is to use my Green Man project as a vehicle for learning to tell those stories.

Each day for 100 days (with possible exceptions, which is allowed,) I’ll spend at least 20 minutes trying a new means of creating a Green Man, or perhaps another concept or two I have in mind. In 20 minutes I won’t complete anything in a day, so each trial may take several days. I give myself permission to abandon a process at any time. Some processes may require I buy supplies, but I’ll use what I can from my current inventory. I’ll photograph each day’s work and post on Instagram, so we can all see the progression. I’ll summarize here regularly, and discuss process and how I feel about it.

Tomorrow is Day 1. My plan for tomorrow is to begin with paper and fabric to create a simple collage. Let’s get started!