In my last post I talked a bit about why color draws us to appreciate some quilts more than others. Besides color, per se, unexpected color combinations might be more important in finding a quilt interesting.

Two other factors that might make a quilt interesting are the combination of fabrics and any story about the quilt’s design, the making of it, or the owner.

When I think about the combination of fabrics, I’m thinking about the impression the fabrics make aside from color or value. For example, within a color group, or within a value group, are there differences that draw the eye? Are there details that contribute to the look or feel of the project?

One strategy that can be effective is to repeat a pattern design in multiple fabrics across a quilt. For example, you might use multiple leafy prints in various ways, or multiple dots, or plaids. When the viewer notices the second paisley, they might naturally search for a third. That search keeps the viewer attentive to the quilt — something about the quilt must be interesting to warrant it.

I don’t often take many close-up photos of my quilts (must change that …) , but recently I shared several pix of my seasonal quilt Christmas Is Coming! These show that the fabrics are mostly in reds, greens, and golds, not unexpected in a Christmas quilt.

Imagine if all the reds were done in only three fabrics. Imagine if all the greens were in one lighter green and one darker green. Imagine if all the light-valued “background” fabrics were the same throughout the quilt. Imagine if there were only one gold. Would it be as much fun to look at? Imagine snuggling under this quilt for a nap, or to read a book. Would a quilt in seven fabrics keep you looking from block to block as it drapes across your lap?

What else would be missing with fewer fabrics? The feeling would be missing. I designed this quilt to be festive, and to include a sense of whimsy. The feeling created by the combination of fabrics leads directly to emotional engagement, one of the things that draws the viewer in to look more.

In this case, more fabrics makes it more interesting. The set includes a broad array of styles and variations on the core colors. I wouldn’t say that more fabrics is always better. I’ve seen fabric lines that, even with lots of print designs, don’t offer variety of style, or much range of color. Creating a quilt using just one fabric line can make it look “matchy matchy,” or excessively coordinated. And that, in my opinion, takes us back to quilts that must depend on something besides the fabrics to be interesting.

In what will probably be my last post on making quilts interesting, I’ll talk about how story contributes.

There are a number of pervasive myths in quilting, some of them so ingrained that even long-time quilters believe them. It’s time to take on a few of these to set the record straight!

The first myth is one I see perpetuated frequently. It’s the story that quilting came about as a way to use scraps and used clothing, by people who had nothing else to use.

Of course, innumerable quilts were created just this way, and still are. People using the bits and pieces available have long made bed clothes both utilitarian and beautiful, from scraps of new fabric and cuts from salvageable parts of used clothing. But this is not the origin of quilting.

There is evidence that quilting may have existed at least 5,400 years ago. Yes, you read that right! According to quilt historian Averil Colby, an ivory statuette of a First Dynasty Egyptian pharaoh shows he wore a quilted robe. The photo in the attached link doesn’t show it well, but a side view with different lighting shows heavy relief with a diamond pattern. The relief suggests indentations made by decorative stitching (quilting,) rather than a surface design.

From the next 5,000 years, there are extant a number of examples of quilts, created for a variety of uses across Asia and Europe. In the Middle Ages, quilted garments were used as body armor. The garments were called “gambeson,” and they looked quite like quilted jackets that people wear now. 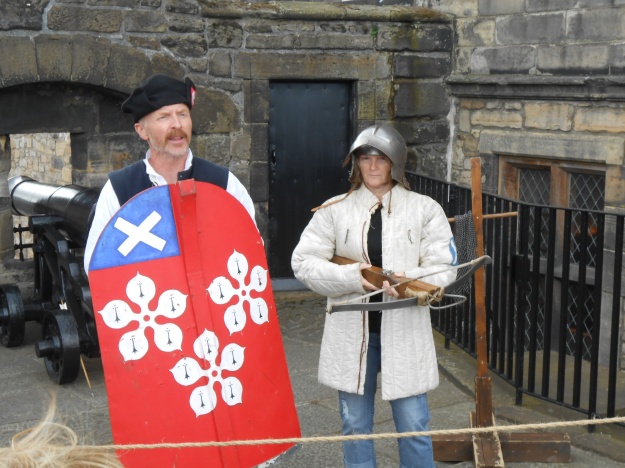 Docent at Edinburgh Castle with audience volunteer. She is wearing the gambeson, quilted body armor. 2016.

Over the centuries, quilted objects also included rugs, wall- and window-hangings for both decoration and warmth, undergarments, and outer layers of clothing. These items were made from a variety of fibers, including wool, linen, silk, and cotton. The preferred fiber depended on the type of object as well as the region in which it was made.

In the New World in the late 1700s and early 1800s, the quilts with which we’re familiar were mostly bedding. But they were not common. They were objects in homes of the affluent. Fine fabric was scarce. It was mostly imported and subject to heavy taxes.

Cotton fabric, in particular, was rare and expensive. As a crop in America, cotton was not mature. The modern cotton gin, used for separating fibers from seeds, was not invented until 1793. The new process allowed the variety of cotton grown inland to be economically feasible, but until then, raw cotton production was quite low. The first American textile mills emulating English technology didn’t open until 1814, and production took decades to ramp up, along with the cotton fiber crop.

Then as today, quilts were many times more expensive than woven blankets. They were listed in estate documents (wills) and included in dowry chests. They were luxury items that took tremendous time to create. Only people of means had the leisure time or the servants or slaves to expend that amount of time.

Because fabric is fragile and perishable, the historical record has unavoidable gaps. Textiles that experienced the hardest use are least likely to persist. But that also argues against the notion that “used clothing” was a resource for making quilts. In the days when most people had two or three changes of clothing, when use was hard and washing methods harsh, there were no “good” scraps left when clothing was ready to be replaced. While even that cloth may have been layered with stitching, it would have created the crudest type of covering.

It may be that the myth persists because so many of us have family heirlooms, quilts made during the Depression or in the 1940s. Many of these quilts used feed sack fabric, or did include scraps from either new sewing projects or from older clothes. However, even in these relatively meager times, fabric was much more available than it was a hundred years before.

Quilting’s story is long. It is a mistake to assume that what we know from recent history can be generalized over the longer term. In this case the assumption is just wrong. Quilting did not originate from necessity. On the contrary, it was a household craft for those who could afford multiple layers of fabric for one object, and the time required to create it.

What quilting myths would you like explored here? There are a number I can think of, but I’d like to know what notions you’re interested in.