It seems so obvious now, but the rotary cutter was a revolutionary breakthrough in quilt making. [heh heh heh!] Before its existence, quilters cut patches, usually one at a time, with scissors. The slow, relatively inaccurate method of cutting makes the works of art from the past even more amazing. 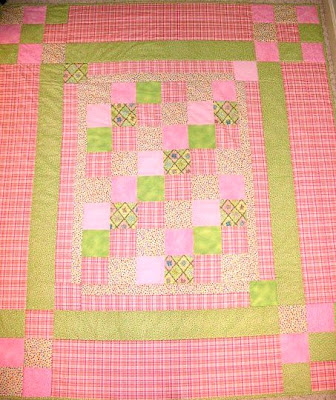 I made my first quilt (to the right) in 2003, cutting the patches with scissors. I’d never heard of a rotary cutter and self-healing mat. As I’ve written before, “… the quilt was finished on time and presented to my daughter at her baby shower, prior to the baby’s birth. And I told her then that I didn’t care how many babies she had, I would never make another quilt.” Truly, having a rotary cutter makes my current quilting life possible!

The first fabric rotary cutter was introduced in 1979 by Olfa, a Japanese company. It originally was intended for garment makers but now is ubiquitous in quilting and crafting, as well. Combined with a self-healing mat and rulers, there’s little we can’t cut.

The most popular blade size is 45 mm, but they do come in different sizes. This short video from Olfa runs through some information on what size to use for what project.

The blades are intended to be sharp. That means not only will they cut your fabric, they’ll cut your unprotected table surface, your skin, your fingernail, your kitten, or anything else that gets in the way. In 2010 I had a trip to the emergency room because of a bad cut. (It was a very expensive one-finger manicure.)

Here are a few safety tips.

Change your blade regularly to improve both cutting and safety. A sharper blade is safer than a duller one. You have to press harder to cut with a dull blade, increasing the potential for slipping and cutting something unintended.

Dispose of old blades carefully, where no one will accidentally get cut. I put my old blades, needles, and pins in an old plastic yogurt cup with a lid. Whenever there are small people in my house, that cup gets put up above their reach. When the cup is full, I’ll encase it in duct tape before putting it in the trash.

Keep new blades in a safe place. Same theory as above.

Close the safety guard or retract the blade when you’re not cutting. Some people think they’ll never drop the cutter or brush past it with bare skin. They might be lucky. I’d rather not depend on that. (On that note, it’s also a good idea to always wear enclosed shoes while cutting.)

Cut away from yourself, rather than drawing the blade towards yourself. There will be times when that won’t work well, but most of the time it does. It’s a good habit to have.

Keep your fingers away from the ruler’s edge. This is what got me. I was gripping the ruler with a finger over the edge, fingertip down toward the mat. I cut off the nail the long way.

Cut while standing. The angle will be better for safety and accuracy.

Don’t work while you’re overtired, distracted, or have vision problems, including insufficient light. Cutting requires your full attention. It’s not worth risking your safety to hurry along a project.

Replace your rulers when they get nicked or worn. You don’t want to catch your cutter on any edges by accident.

Did you start quilting before rotary cutters, or without one as I did? Or do you prefer scissors to a rotary blade, as my friend Florence does? Have you moved on to a Go cutter or another type?