Two things quilters often hear are “how long did it take you?” and “you should sell those!” Of course, the two thoughts are related, as we often place value on things (consciously or not) based on how long they take. What is the value of having your furnace repaired? Do you determine that based on how long it took the furnace tech to fix it, or on whether or not your home gets increasingly colder?

I’m in a Facebook group focused on longarm quilting. The members range from experienced professionals to raw rookies, quilting for their own pleasure. From both ends of the spectrum, questions arise about how to value their work. Recently a member asked how to price a queen-sized quilt, which someone had asked her to make as a commission. Another member suggested using a simple formula of charging three times the cost of materials. In other words, if materials cost $100, you should charge $300 for the quilt.

Let’s do that math and see how that works out.

END_OF_DOCUMENT_TOKEN_TO_BE_REPLACED

I’ve discussed a variety of aspects of the quilting industry. A list of links is below. One part of the industry I’ve mentioned but not explored is longarm quilting.

While the longarm industry has exploded over the last few years, it is not new. In fact, quilters have used sewing machines to quilt since sewing machines were invented. (Note: “quilting” is the process of stitching through the top layer, stuffing/batting/wadding, and back layer.) Soon after, inventors were developing various methods for moving the layers under the needle, having secured the layers to a frame. As now, two different options were to move the frame with a stationary stitching machine, and to move the machine with a stationary frame.

This post from Hart Cottage Quilts (this link is no longer active) is worth reading in its entirety. Within it she explains:

By the end of the Civil War, sewing machines were entering homes at the rate of 20,000 per year; in 1871 Singer sold an amazing 180,000 machines. Mrs. Augusta Hoover received the first U.S. patent for a machine quilting frame. Its description as an “improvement” suggests that it was not the first of its kind. Like most of the systems that followed, it consisted of a two-bar, ratchet-geared roller frame that held the quilt taut. (A comparable modern example would be the John Flynn system.) The frame then slid along tracks attached to the bed of the sewing machine like the carriage of a typewriter. As the user operated the sewing machine, the frame would move along the track, allowing perfectly straight, parallel lines to be quilted.
…
By 1877 J.J. Crall decided it should be the machine, not the frame, that moved; his system will be recognized by modern quilters as the precursor to today’s longarm quilting system. Just as today, the machine sits on a platform which moves along a track underneath the quilt.

The origins of the modern longarm quilting machine began with Fred Nolting, a tinkerer, repairman, and inventor. In the early 1960s he rebuilt his first sewing machine, increasing its throat length to 24″. After several years of rebuilding machines for various employers, he was asked to build a machine from scratch in 1972. According to Nolting, “This machine was the first long arm, similar to the ones today, without the hopping foot.” Over the next few years he continued to improve the machine, adding a hopping foot, stitch regulation, and other things. He also built the first longarm machines sold under the Gammill name, before striking out and selling machines under the Nolting brand in 1984.

When I began quilting in 2003, longarm quilting services were few and far between. I first had quilts professionally done in about 2006. That quilter also had a machine in her shop, for which quilters could rent time after taking and passing a day-long class. I did the class, and I rented time to create a couple of quilts. When my sister purchased a longarm in 2009, I visited her and her machine a number of times, before buying my own in 2010. I never intended to quilt for others as a business, and I still have no interest in doing so. 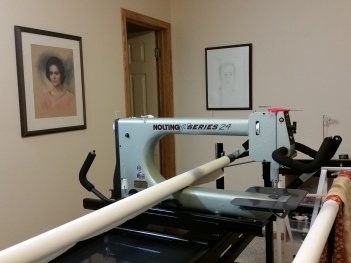 For some, quilting for others is their business and pleasure. In order to make it a business, quilters charge for their services. Depending on their offerings, quilters might use pantographs, computerized design, or custom free-motion quilting. This link and this link describe the differences in some of the possibilities.

How much do quilters charge? It depends on many factors including the style of quilting (see above,) the size of the quilt and/or the time required, the batting used if the quilter supplies it, the threads used as well as how many different colors, and if other services such as repairs are needed.

I’ve read a lot of informative posts over the years about longarm quilting. This recent post by andi of andicrafts explains her pricing. As a business owner, she is responsible for creating a high-quality product/service; paying for her own space, equipment, supplies, utilities, web access and website; paying her own salary and benefits; and advertising and performing all other administrative and marketing tasks. As a highly skilled worker, she should earn, after all those other costs, much more than minimum wage. (It’s a terrific post and I encourage you to read it, including the comments following.)

This is the same argument I’ve given before in some of the posts linked below. If a quilter is selling her quilts, she puts a lot of resources into them. Once she has created her quilts, paid for her direct and indirect costs, and paid her own wage and benefits, she should make more than the wage of a low-skilled worker. (And yes, I’m using the feminine pronoun here as a shorthand for members of a group that also includes men.)

Do you quilt for others as a business? How do you choose to charge? Do you send your tops to someone else to quilt? Do you quilt for yourself? Have you had either great or terrible experiences with customers or with longarm quilters? Tell us in comments what you think about longarm quilting.

If you’d like to read my posts on quilting as a business, you can find them here:

Do you keep track of your quilting expenses? Fabric, batting, thread, tools, machine maintenance, guild dues, books, patterns, show entry fees, travel expenses — these are just some of the things we spend money on! If you quilt as a business, you might track all these costs and more. (Check my post on direct and indirect costs for more on this.)

Last year for the first time I tracked some of my expenses. My intention at the beginning of 2015 was to keep receipts on everything. Oh, I have receipts. I’m not that great at organizing paperwork. Can do it, but not very inclined… Fortunately, my credit card company saves a lot of that data for me. They don’t capture my cash expenses, of course. And not everything is plopped in convenient categories for me. But I can pull out all my purchases at quilt shops, fabric stores, and for my on-line thread buys. If I make reasonable assumptions for a couple of other things, for 2015 spending, I estimate between $1500 and

This is fabric, thread, batting, machine service, a new ruler, an iron, supplies, and shipping a quilt to friends.

Four things I know about this:
1. It’s cheaper than therapy.
2. My stash is a little smaller than it was a year ago, meaning I used somewhat more fabric than I bought. (Thinking through the 20 projects I made last year and their average fabric use backs this up.)
3. It doesn’t account for my earnings from teaching, presenting, and publishing.
4. The dollar value puts me in the category of a “dedicated quilter.”

I’ve written about the dedicated quilter before. Every four years, the quilting industry conducts a survey to assess the demographics of quilters, as well as how much they spend. My earlier post says this:

The survey is conducted in two phases. First, households are questioned about their quilting activities to get a sense of the scope of the quilting industry in the U.S. Next, “Dedicated Quilters” are surveyed to understand their buying habits, and how they use and contribute to the industry. According to the summary linked above,

Demographics of the Dedicated Quilter indicate she is female; about 64; is well-educated (79% attended college); has a household income in excess of $100,000; and has been quilting an average of 20.3 years. Among Dedicated Quilters, 81% are traditionalists, while 38% embrace art quilting, and 35% enjoy modern quilting styles. Some enjoy multiple types of quilting.

The Dedicated Quilter owns, on average, almost $13,000 worth of tools and supplies and has a stash of fabric worth nearly $6,000, which the majority (88%) store in a studio or room dedicated solely to sewing and quilting activities.

My first thought when I read that was I couldn’t possibly spend more than $500 a year on quilting. On reflection, I realized it would be easy to do so. And on looking at proof on the credit card summary, uh, yeah.

But the phrase “dedicated quilter” still bothers me. (Labels!!) The amount of money spent isn’t a good indicator of dedication. Perhaps time spent is a better measure. How much time one quilt takes is not very important to this issue. Getting from one end of a project to the other is, I suppose. Or maybe not… Can you be a dedicated quilter if you don’t finish projects? What defines dedication?

Do you think of yourself as a quilter? Are you a dedicated quilter? What does that mean to you? I’d love to hear about it in comments.