Yesterday I showed you the pieced back I made for my current project. And I also confessed, I really don’t like making pieced backs, and I often don’t like the looks of them. While it’s hard to shell out bucks for enough yardage of new fabric for a back, that decision will often make me happier than cobbling together chunks of fabric from my stash.

However, there are some pieced backs in my past, and there are even a few I like. Here are some examples. First, the Big Block Quilt for a grandson.

Next, The Baby’s Quilt.

Here is a wedding quilt from early 2013, before I was blogging here. I’ve done backs like this for a couple of grandson’s quilts, too.

Here is Dan’s graduation quilt. The back says, “I ONLY PLAY SOCCER.” As you can imagine, there is a long story that goes with that.

Front of Dan’s graduation quilt. 2010. The shape isn’t actually warped like that. The photo made the distortion.

Do you remember when President George H.W. Bush declared he did not like broccoli? He had never liked broccoli, since he was a little boy and his mother made him eat it. As an adult and president, he would not eat broccoli!

I do not like to make pieced quilt backs. The ideal quilt back, in my opinion, would be one that came from the store, already the correct size, washed, pressed, and ready to load on my quilting frame. I can’t have that, but as queen of my realm, I have decided to minimize my time making pieced backs. It makes my realm a happier place.

However, now and then, making a pieced back is still the right decision. My current project is a medallion with a bear’s paw block in the center. The top is done and ready to quilt. One of the feature fabrics on the top had very little left, a piece about 20″ x 35″, plus scraps of various sizes.

Fabric design by Julie Paschkis for a Washington State shop hop a few years ago.

As much as I love this fabric, I’m not interested in keeping a small chunk of it around. It is distinctive enough it needs to be used carefully, up to having a quilt designed around it. That’s more responsibility than I want right now!

I decided to use it up in the back of the quilt. That was an easy decision, partly because the other “right” fabric I have wasn’t quite big enough for full coverage.

This piece has stylized deer on it. It’s actually a seasonal fabric called “I Love Christmas.” I don’t know who the designer or maker are. It fits the nature theme of the quilt.

Designing and making a pieced back isn’t quite as much work as for the top. But it does require some thought, especially when using up stuff. After thinking carefully about it, I decided to make four large bear’s paws — not bear’s paw blocks, but the paws that are units of a block. This is the center strip of the back, with the paws “walking” in a direction. Each paw block is 18″ square, so the arrangement is 36″ x 54″. I had to piece in the deer Christmas fabric carefully so I didn’t run out of it. A bonus is I used almost all the rest of the turquoise fabric, too. It has little birds in a tone-on-tone print. Only scraps will be left of all three fabrics.

The back is loaded on the frame now. I need to choose thread color and do some maintenance on the machine before starting. I’m still pondering how to quilt it. But I am making progress.

Ah, quilt backs… by the time you get to the stage of making the backing, you’re almost done, right? Well, maybe…

I’ve showed you how to make a fast back from a single BIG piece of fabric. Problem is, my stash has few big pieces. I never made a habit of buying large yardages, on the off chance I could later use them as backs.

That gives me choices: 1) buy a large piece for a particular quilt when needed; 2) use three or four largish pieces from stash and sew them together; 3) piece more heavily from stash. (See this link — the blogger regularly pieces her backs from all kinds of bits and pieces!)

Though I’m getting more comfortable with pieced backs (#2 or #3), I usually opt for using one fabric. Generally I don’t enjoy cobbling together a back from other chunks. When I needed backing fabric for my latest top, I figured I needed at least 4.5 yards; with 5 yards I could make a fast back. I went to JoAnn’s and bought a toffee colored, mottled print, all that was left on the bolt. It was about 4.5 yards.

And then I decided to take a different route.

Still enjoying the colors and fabrics of the top, I chose to heavily piece strips for the back. My inspiration is Seminole style piecing. A few weeks ago, when choosing whether to keep the quilt square or make it rectangular, I had two borders left over. The first strip to include was the borders that I didn’t use in the top. I joined those two pieces with patches that were left over, and added chunks to the ends to lengthen it for the long-arm frame.

I made another strip In purples and greens, rusts and golds, to mimic the half-square triangles border on the top. Yet another is similar to the flying geese, including the bright green batik featured on the top.

I think they are all in order now and ready to be assembled. When finished, the stripped piecing will cover the majority of the back. In fact, I’ll have used very little of the toffee-colored piece I purchased.

For me, this is one more experiment. While I’ve always loved the looks of strips quilts, most of those I’ve made have been very traditional, symmetrical, and block-based. This asymmetric approach is slightly unsettling, partly because I “don’t know how” to do it and also because I’m not very good at it. But how can I learn if I don’t try it? Can’t. So try I will.

This is far from a fast back, but so far I’ve enjoyed the process. The look of it will suit the top well.

Do you make multi-fabric quilt backs? What approach do you take — big chunks or bits and pieces, big squares or another quilt?

Though we’ve usually been blessed with great neighbors, we haven’t maintained ties with all of them. As we’ve moved, or they have, some friendships have faltered. Others, though, remain.

Seventeen years ago we moved to a new home. The neighbors to our right had lived across the street from us at our previous home. They thought they could get away, but we followed them! And next to them lived a woman with her daughter, a beautiful girl about five years older than our son. Over the years The Girl and Son developed a special relationship. When he began taking clarinet as a fifth grader, he balked at practicing, which led to frustration for all of us. The Girl played clarinet in the high school band, and we asked her to sit with him while he practiced. With that simple solution, he practiced willingly and improved dramatically. And they forged a friendship that continues to this day.

The Girl grew up and moved to college. After grad school she married a high school classmate. As a wedding present I made this mock-Amish quilt. It has a disappearing 9-patch center. I’ve always liked the graphic impact of it.

Last fall we found out that The Girl and her husband are expecting a baby, due in a couple of months.

In January I decided to demonstrate how to turn a medallion center block on point. I considered what center block to use and chose a star-in-a-star. Years ago I made a wall hanging with a similar design, and it had an Amish feel, too. So as I pulled fabrics for the tutorial, I looked for a mixture of darks and brights to emulate it.

What I found surprised me. My stash is full of bits and pieces. Until last year I rarely bought a full yard of anything, unless I had a plan for it. Often I run out of fabrics with just scraps to go, and often I sub in others for those that have run out. But I had enough left of a dark purple to create setting triangles and a border. And I knew this would become a special project, much more than a tutorial sample.

This would become The Baby’s quilt. 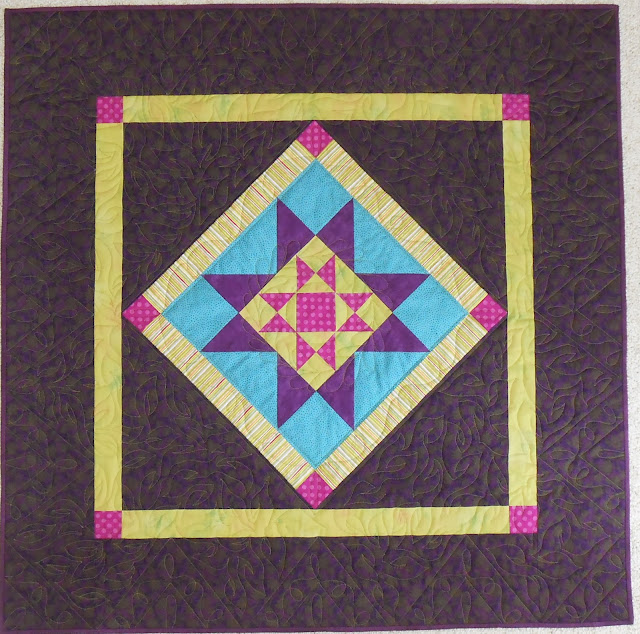 You’ve seen the back of the quilt already, but here it is again. 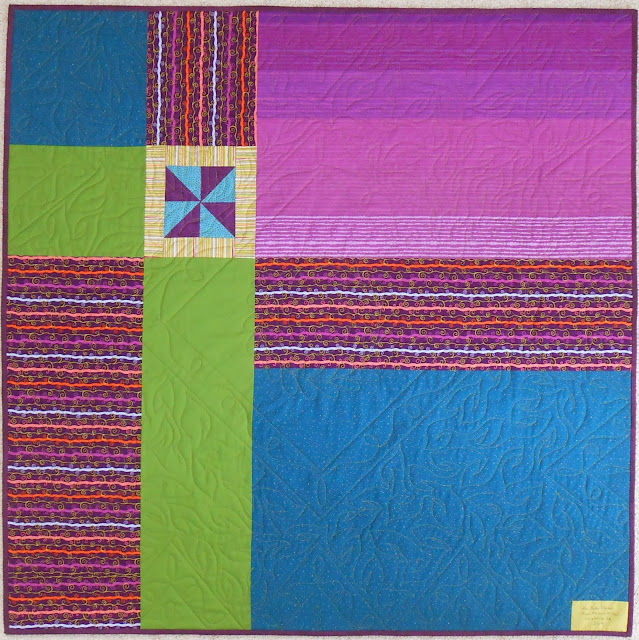 Construction of the top was very simple. The focal point a variable star framed by variable star points. The complete star-in-a-star measures 16″. With the striped green interior border, the center is 20″. Turning the center on point took it to about 28.25″. For the last purple border, I cut it as wide as I could, given what little fabric was left. The finished quilt is 46″, and I think by chance the proportions came out very well.

Then I was faced with quilting. While I could have done a simple edge-to-edge pattern, I wanted something to highlight the shapes. For the first time I used a ruler base and ruler with my long-arm machine, to create a zigzag design around the outer border, and to echo the interior lines. Besides that, I free-motioned a spiky leaf through most of the background. I still have a lot to learn with my quilting, but generally I’m very happy with how it turned out. 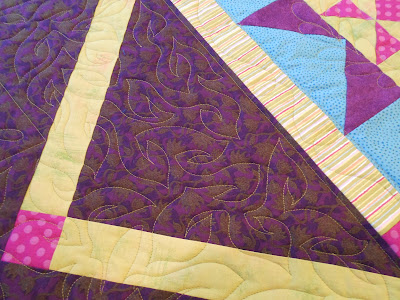 The last challenge will be delivering the quilt and watching while it is opened. Because The Girl lives in another state, we hope to use Skype or FaceTime to see them open it.

Good neighbors are special, but good friends are precious. We are fortunate that The Girl, her husband, and her mom continue to be part of our lives. And we look forward to meeting The Baby later this year. 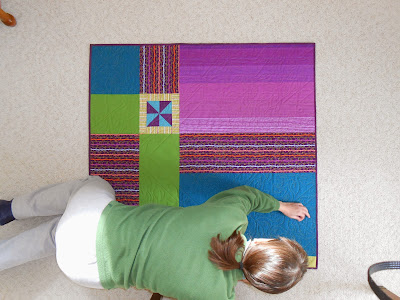 Jim took this picture of my back. He is standing above me on the coffee table while I pick threads off the quilt. He says this is a typical view of me. 🙂

This is the back of my newest quilt, which I finished Monday. It’s a baby quilt, and the front is quite different from this. I’ll show it to you soon.