My son bought a dinner table this spring, and he bought a house this fall. In the meantime he spent three months in Kuwait, and he’s now in Oklahoma for some training. Despite his frequent forays away from home, he is a domestic kind of guy. As soon as he acquired the table, he asked for placemats.

I shouldn’t be surprised. He grew up with placemats at the kitchen table. When he was little, we used plastic ones for him. We have several. Two of them have US maps and one has a world map. One shows the solar system and another has the presidents through Bill Clinton. There are a couple of others, as well. Here are two favorites.

When he was older I began quilting. An early project was placemats using maple leaf blocks in the centers. Jim and I still use them on our kitchen table. This photo shows a pair I made for my sister, using the same design and most of the same fabrics.

I’ve made other placemats, some for daughters and some for Meals on Wheels and some for us. I don’t much like making them. It seems like a lot of effort for something that is mostly covered when being used. But Son asked, and what’s a mom to do?

As mentioned, he’s recently moved. The house is a project, to put it mildly. (He’s also asked if we can help him paint when we visit next time.) He has red accents in the kitchen, and the couch is brown. His couch throw is a quilt I made, with blues and greens. The tabletop is stained very dark, almost black. He didn’t have a notion of what colors I should use, so I used all of them. 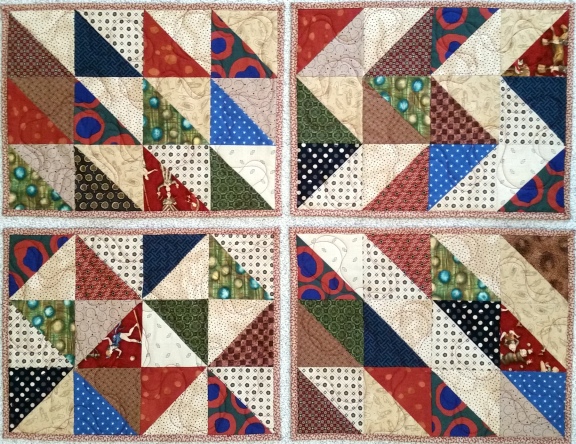 How much are they worth? Earlier this year I wrote about making placemats and how to value them. Let’s just say, I wouldn’t do this for just anyone. But these are a Christmas present for him, one which I’m confident will be used. That makes it worthwhile for me.

Last week I started working on a new table runner for a cabinet in my dining room. I have a Christmasy one and a couple that work great for fall. But I didn’t have one in brighter colors for spring and summer. We’re throwing a party this month, and I thought this was a good time to make one.

I’ve also whined to Jim oh-so-many times about not having cheerier placemats for our kitchen table. Really, who could fix that for me??? And certainly what better time to make placemats than now?

But here’s another thing: I didn’t have a plan, and I have a very hard time working without a plan. Should I design a block for the placemats? Or for the table runner? What should I make?Aaaaaaack! SO HARD! In fact, too hard. Lots of times I make things too damn hard, too complicated. This should be fun, easy. I should PLAY!

PLAY! My word of the year. So hard for me to do, which is why I need to practice that more.

I started with the table runner. Recently I’d sorted the scraps from my kaleidoscope quilt. (Still planning a post on it.) The 12 wedges that make up the star are built from strip sets. You sew together matching pairs of four to six strips, then cut shapes from the matched strip sets. The scraps from cutting the shapes are pieced from strips, too. That makes them harder to use than single-fabric scraps.

But in the spirit of PLAY, I took a rotary cutter to a couple of chunks, cutting rather perpendicular to the seams. I didn’t use a ruler so they weren’t exact. Then after wondering what the heck I’d do with those pieces, I found a fat quarter I like but have had a hard time using. (Do I say that about a lot of my fabrics?) So I cut strips from it, too. And without a plan, I built the centers for three blocks using the kaleidoscope scraps and a weird fat quarter. The block centers were different sizes once built. Then I framed the block centers with strips of another fabric, and I cut the blocks all to the same size. The frames are wonky because the centers are wonky. Narrow sashings between the blocks separated the frames. Then I bordered the whole thing with the sashing fabric.

Then I needed to make a back for the table runner. Again, I tried to make things too complicated. If it were pieced, the table runner could be two-sided. So I started pulling fabrics for a pieced back. Then I thought, no, maybe I’d make two table runners. Blech… Ultimately I cut a bunch of 5″ squares, thinking I’d just piece squares together for a second runner, and thought I’d piece a bunch more into sizes for placemats. Complicated, yes?

As I dug through things for that, I found a piece of yardage just the right size to make three placemats.

Here’s how it shakes out: I made a table runner. I pieced together a bunch of squares, which I’ll cut into two placemats. I cut a piece of wholecloth that will be three more placemats.

Then I found one of the ugliest fabrics I ever bought and used it to back all those things.

This afternoon I quilted them all. I loaded all at once on the ugly fabric, with an old piece of batting.

The wholecloth placemats are on the left, the pieced squares are in the middle, and the table runner with wonky blocks is on the right.

Binding still to come, but otherwise I’m reasonably happy with my play time.

If you missed me, I hope you didn’t cry for me! Jim and I went on a road trip to West Virginia. We met our daughter’s family at a state park for the weekend, and we enjoyed time with them all. Laughing, hiking, snowball fights, Christmas presents, all part of the fun. On the way there and back, we stopped for hiking. Blog posts to come on Our View from Iowa in a few days.

And now the year rushes to a finish! Fortunately I’m nearly done with holiday planning and can concentrate on quilty time! With so little time left, I need to sprint to finish some UFOs.

This was my list as of November 26.
1) My Medallion Quilt: attach label
2) Round robin Triangles quilt: attach label
3) Mexican embroidery quilt: , bind it, label it
4)
5) Crayon blocks from Outer Banks 2009: divide them into 3 or 4 sets, sash, quilt, etc.
6) 6-pointed star: assemble points and decide on a setting
7) John Deere project with granddaughter
8) And OH YEAH a boat-load of Medallion Sew-Along samples!

DONE: the Mexican embroidery quilting is done, and the binding is attached. Though I’ve been finishing more bindings by machine, this one will be finished by hand. It’s on the living floor and I’ll get up to work on it in a few minutes.

DONE: the placemats! All sixteen of them are finished and delivered. Each of my two daughters received a set, not as Christmas presents, just presents.

Realistically, with the year winding down, what can I finish? I can attach the labels. I also have tops for three medallion quilts that are ready to quilt. One is on the frame and I’ll quilt it tomorrow, if my day goes well. A stretch is to get one more top finished and quilted.

How are you doing on your year-end goals?

I’m working on old projects. I don’t have a lot of UFOs, so even knocking off two or three makes a big dent in my list.

These are the UFOs as listed on my Fourth Quarter Goals post:
1) My Medallion Quilt: attach label
2) Round robin Triangles quilt: attach label
3) Mexican embroidery quilt: quilt it, bind it, label it
4) Placemats: attach binding
5) Crayon blocks from Outer Banks 2009: divide them into 3 or 4 sets, sash, quilt, etc.
6) 6-pointed star: assemble points and decide on a setting
7) John Deere project with granddaughter
8) And OH YEAH a boat-load of Medallion Sew-Along samples!

Man, considering how busy I’ve been, I can’t mark a lot off my list. I did not put labels on My Medallion Quilt or on the Triangles quilt. (Truth? I DO label, but it’s my least favorite task.) I haven’t done anything about those crayon blocks or the John Deere project.

I did think about how to assemble the 6-pointed star, as described here. It’ll have higher priority again next year.

And I have moved along those Medallion Sew-Along samples. I made progress on most, and finished three tops out of nine that I started. Those are shown here and here.

3) Mexican embroidery quilt. In the middle of 2012, my sister and I agreed to do a “round robin” with each other. Granted, it wasn’t particularly round, since it was just two of us. But we each made a quilt center and mailed it off to the other, with some fabric pieces and no instructions. The centers had borders added and were traded again. We continued until they were “done.” I’d have to count mine to figure out how many times we traded.

The resulting tops were glorious, completely different expressions of our creativity. Hers has been done for a year or more. Mine has waited. Other projects took priority. But now it is on the frame, and I have been quilting it, slowly and — not very surely. My confidence is low, and I’ve picked many stitches. Still, I am making progress.

4) Placemats. Another project I started in 2012 was placemats for special people not to be named yet. They are not fancy but when done, should be very useful for the recipients. The real problem with placemats is the binding-to-quilt ratio is very high! So they also have waited. Now I have 8 of the 16 done and wrapped. The other 8 are in process.

As to non-quilting goals in the post, well, those vary. I’ve moved serious writing to the slow track for now. But Jim and I did finish the food pantry web site update, and I continue to volunteer at the pantry a couple hours a week. We’ve been walking and doing some more serious hiking, which I love more all the time.

And as noted at the bottom of the post:

There are always things to work on, and I have so much in my life. I am incredibly blessed.

Thank you for stopping by. If you’re a regular here or this is your first time, I appreciate that you’ve taken the time. I wish you the blessings of plenty, too.