Who gets to decide the answers to these questions? You do. There are no rules for medallion quilt size, or for any of its components. (Believe me. I’ve looked.) And even if there were, I’d encourage you to break them whenever you want. You get to make your quilt your way.

The same is true for medallion borders. Their primary role is to support the center, the star of the show. But I’ve looked at historical medallions, and I’ve looked at contemporary show quilt medallions. I’ve read the only “rules” on this I can find (and I don’t necessarily agree.) Borders, and design components within borders, can be whatever size you want.

Let’s think about the various aspects of borders that affect proportions of the quilt:

Let’s start with how big an individual border is relative to the center block. Again, there are no hard rules here. But because the center block is intended to be the primary focal point, it makes sense that no border should be as wide as the center motif.

Indeed, Joen Wolfrom makes the argument, seemingly based on her personal preferences, that the total border width on a side should be less than half the width of the center. Here is advice she gave to entrants of the OEQC 2009: “If you are designing a medallion quilt … Generally, each side border should be no more than half the width of the medallion center. If the borders become much wider than the medallion center, the borders take over the design.” This is unnecessarily restrictive.

The Golden Ratio is a geometric calculation that has been studied for at least 2,400 years. Some believe that it was used to develop ancient Greek architecture, not to mention innumerable other applications since. To simplify substantially, it is the ratio of 1.61 to 1. (huh?) And to make that applicable it suggests that two measures, to be aesthetically pleasing, should be scaled so one measure is 1.6 times greater than another. 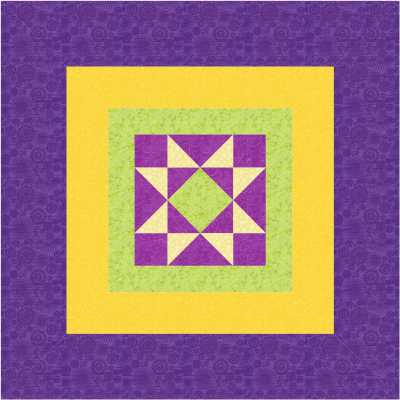 To approximate it in EQ7, this illustration uses a 15″ center block, 3″ first border, 4.75″ second border, and 7.5″ final border. The total quilt width is 45.5″, so the center is about a third of the total. To play devil’s advocate, what if we turned the order around? Does it look as good?

If I ignore the color/value use, I think yeah, it does look pretty good.

Okay, that is a rule that is worth keeping in mind. And there are other mathematical rules or progressions that could be tried, such as the Fibonacci sequence.

For practicality, though, designing pieced borders to fit the calculation could be rather torturous. My number one rule is to find the process rewarding, so I even if I use these mathematical progressions, I’ll certainly modify sizes to make design of individual borders easier.

That seems like a good segue to the next topic on proportion, the design of one border and how its shapes and sizes relate to the rest of the quilt.