Sometimes all the what-ifs lead to creative breakthroughs, and sometimes they just set up roadblocks to making. If you chase every possible path, you’ll never get anything done.

After finishing the checkerboard border, I had lots of choices available. The size of the center (center block plus the border) was odd, something like 19.75″,  and it would have been awkward to add a border of regular square blocks at that point. I could have added a spacer border to make a an easier fit, but I wasn’t happy with the sizing that would have required, either. And I would have needed a plan for type of pieced border, so I could choose the spacer border width.

What if, instead of a pieced border, I made an appliquéd one? Then the width wouldn’t matter, except relative to proportions. Yeah, that could work. That begs the question, what kind of appliqué? Something pretty simply, something small to work with the proportions, something in colors already used, or similar enough to them that the color isn’t confusing. Well, I guess that narrows it down…

At least it let me get started. After the dark blue and bronze checkerboard, I wanted an edge of salmon. From a construction standpoint, the narrow border would stabilize the piecing, since the checkerboard squares finish at 1 1/8″. From a design standpoint, it would repeat the color of the rooster’s feet and eyeball, and refer to the background coral (mesh-like print) and the rooster’s comb and wattle. It would brighten the composition with the accent, and give separation from another, darker border.

I decided to try for a finished width of about 1/4″. In retrospect, a flange would have worked well, too, and may have been easier to execute. But this worked well enough. Before attaching, I made sure the center’s corners were good and square. That involved shaving off tiny bits of the pieced checkerboard along the edges. Fortunately they were in pretty good shape. Then I pinned the narrow salmon border with lots of fine pins, so the two pieces were flush along the edges, and they wouldn’t slip away from each other. I stitched carefully to maintain the seam allowance. (And when I add borders, I always backstitch at both ends.)

I had already chosen a blue for the last border. It’s the same color as the blue on the chicken, but rather than a random-looking stripe slashing across it, it has a very fine cross-hatching of black and off-white, suggesting plaid. The regularity of design repeats the regularity in the checkerboard, but of a completely different scale.

I drew a simple shape to appliqué, thinking I could just repeat it a number of times around the edge. After digging through lots of fabric, I chose a dark toffee color with a brown leaf print. I pressed fusible web onto a small piece of it and cut out three of the shape. The shape is either an X or a +, depending on orientation. With the size I cut it, there is only room for it as an X.

Once I had the three samples and auditioned them on the blue border, I decided they took too much attention away from the rooster. I could have gone through a million more what-ifs, everything from what color or width of border to use, what color or shape of appliqué, whether to go back to the idea of a pieced border. The fact is, though, I like it just the way it is. I declare the rooster top “done.”

The other day I posted some tips for “newer” quilters, and many of you chimed in with more in comments. Since then I stumbled upon something I read a few years ago. It is a 2009 interview with a newer quilter, someone with little experience in the art. She also provides a few tips, from her own perspective. I’ll start by sharing this question and answer from the interview [edited to note that the quotes below are from a longer version of the interview that no longer has links]:

KM (interviewer Karen Musgrave): What advice would you offer somebody making their first quilt?

I’ve never seen better advice on quilting or any art than this:

Allow your heart to lead you.

At the time of the interview, Joy Major, the quilter, had made only one quilt. Even so, she understood what makes a great quilt:

JM: Love. The energy, the thought. The care, the care in making it. When I had my pieces of material, I treasured each one of them. A small piece, that piece right there. Love, that’s what makes a special quilt. The meaning of the quilt. The purpose of the quilt. The energy that it carries with it, the response that I had, the response that perhaps other people had, your response. I think that is the most important part. Certainly love. [Bold emphasis added by me.]

At the time of the interview, Joy Major was an inmate of the Ohio Reformatory for Women, serving a minimum of 25 years for the murder of her husband. She was invited by her prison chaplain and encouraged by her therapist to work with a quilting project called Sacred Threads.

Participants in the quilting project had limited access to resources of all kinds. Time, fabric, and notions were in short supply. As you know, constraints often lead us to our most creative work, and that was true for Ms. Major. What she did not lack was the desire to honor her own story and that of fellow inmates with her work and with her heart. She allowed her heart to lead, and created a fascinating quilt unique to her. 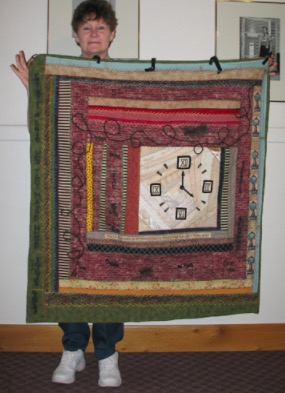 I encourage you to read the here.

Your thoughts? I’d love to hear in comments.