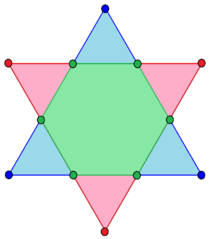 Last week I looked at some very old posts from this blog. One noted a handful of UFOs, including the 6-pointed star. I needed to set the points in background and then figure out what else to do. That was more than four years ago, and already it was a challenging puzzle.

Besides the design puzzle, it also provided some good quilting puzzles. First up, the batting. I decided to quilt it with wool batting. I have two new batts in the closet, both large enough for this project. However, I also had largish chunks of remnants. I wondered if there was enough to use for a quilt finishing at about 80″ square. After pulling it all out of the closet and draping it across the floor, it was easy to see there was plenty. They were all the same brand, Hobbs. However, I found that each batting was substantially different. Some was thick, dense, and spongy. Some was thin and with little resiliency. Some varied in thickness and density from one side of the batting to the other. (The new batts in the closet are a different brand. I’m hoping for better consistency.)

The quilt center is large enough, with the large background setting, that I decided to use a double layer of batting to set it off. That gave another challenge — how to use those remnants to show the center off, and also have fairly consistent loft and density through the rest of it.

Big question: should I stitch all the batting pieces together before starting to quilt? Big answer: NO! It seemed like stitching would crush the edges. Instead I saved the piece I wanted for the center, and other than that, simply kept sliding in more pieces as I went. It was a pretty improvisational method, but it worked. You can see by the translucency in the photo below that there is no batting behind most of the quilt top at that point.

For most of my quilts I wouldn’t have the patience or see the need for “custom” quilting. Instead I use some kind of edge-to-edge design, such as loops and leaves, or spirals, or all-over feathering. This one, again because of the large center star and setting, seemed to call for more special treatment. I used a combination of free-motion quilting and ruler work on this quilt. In the photo above you can see I used blue painters’ tape to remind myself of where I wanted to put feathering. The tape is easy to use and move and move again with no damage to the fabric.

Here are a couple more photos of quilting in process.

Choosing the second method is easier in some ways and harder in others. For example, it requires big-stitch basting through all the areas to be quilted after turning. The basting stabilizes and secures the layers, so they don’t shift and pleat with turning.

When I got through the first time, I turned it and started again at the top.

The quilt isn’t finished, as I don’t have binding on it yet. But here it is, quilting finished and off the frame. The first photo shows some of the detail, while the second gives the big picture. You can see in both of them that the wool, especially in the center, gives a lot of stitch definition and texture.

I’ll finish with binding some day soon. And I need a name for it. (Any ideas?) Before that, though, I’m working on my class sample. I’ll show you progress on that soon.