My last post, Getting It Out in the Open, surveyed six of nine plastic drawers in my studio. Over the past several months, the drawers have been victims of entropy. “Entropy” is a great word. Do you know what it means? It is a physics term, a noun. One of its more general meanings is “a gradual decline into disorder.” Life is often like that, isn’t it?

In fact, the first six drawers were just about as ordered as they ever are. It’s the last three that have suffered. Here is Drawer 7, and this is where things start to get interesting.

First up is a few tidbits cut from some beautiful African fabric I bought a few years ago at a quilt show. I have a basic plan for these but haven’t gotten to them yet. That’s a basic oatmeal-colored carpet underneath it. 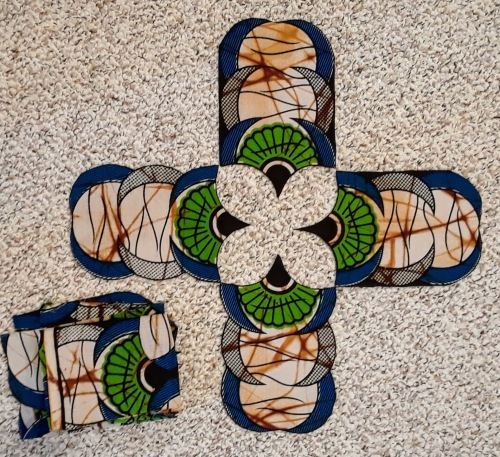 Next, a semi-secret project I’ve had kicking around in my head for a few years. The photo did bizarre things to the color here, which I wasn’t able to correct. Nor was I motivated to try taking the picture again. The background fabric is a lovely blue ombre I purchased maybe last year. Not terribly long ago, but this year is quite a blur, so I’m not sure. It is intended to look like the sky at just past sunset, so if you can push that color into your brain, you’ll get what I see. Most of the images on the background will be darkened, not quite to silhouette, with a house or shed on the left and windmill on the right. The central image is the secret part, so you might not see it until someday rolls around and it is done.

Also in this drawer is my mask man. I still don’t have a good plan for it.

Finally, the rest of the stuff in the drawer is various leftovers from the Wind River Beauty project.

I really need to sort through it. The bigger pieces can be restashed and the little ones go to scraps. I finished the top in February and had it on the frame to quilt before the end of the month. Here it is, loaded and ready to go. 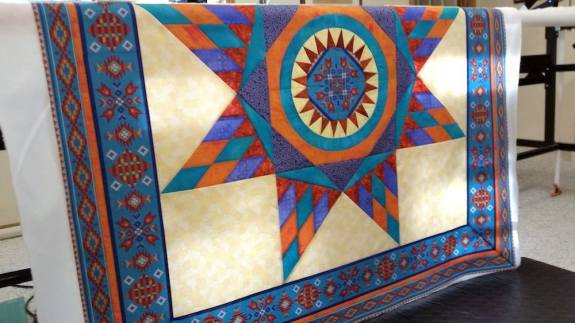 I wasn’t happy with how it was going, and I hated the backing fabric. (Note to self: don’t use backing fabric you hate just because it’s big enough and you don’t want to buy something new. It’s a false economy.) Also I needed to move along to the new grandbaby’s quilt, so I took it off and unstitched the quilting. When we got back from the baby trip, I loaded it again with a new back. Again I was unhappy with the stitching, so removed it and unstitched it again.

Right now, Wind RIver Beauty is the only unquilted top I have left from the year.

Two more drawers, and a few other things, left to review.