Here I am three weeks into the Green Man project. When I told 7-year-old grandson Isaac that I was giving myself 100 days to work on it, he thought that was a long time. It’s funny about perception of time, though, isn’t it? The first three weeks have rushed by and I feel like I’ve hardly started.

I’m still waiting for delivery of supplies. (I would not do well in “the good old days” of waiting many months for delivery of a sewing needle, as in this post from a year ago.) In the meantime I persist with other efforts. Last week I started on a rooster project, conceived long before the Green Man was proposed.

My rooster began its life as a hen. I guess that makes it a trans-rooster. A magazine advertisement with a rough drawing of a hen was the starting point. I traced the basic shape, which was about 7″ tall. Using the old-fashioned grid system, I increased the hen’s size, at the same time elongating its neck.

Here is a photo of the rooster sketch. You can see I inserted leg extensions near the bottom of the picture. The fluffy feathery part of the rooster legs is what I call “pantaloons.” Surely there is a correct word for that. 🙂 I taped the drawing to a big window to create a light box effect.

I do still have some fusible web but of a slightly heavier weight than preferred. After pulling out lots of “maybe” fabrics to cover the rooster, I started out appliquéing on muslin. This is what comes from inexperience. 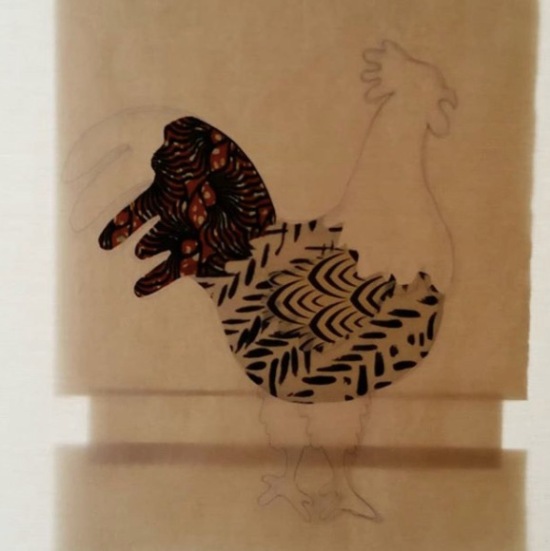 It’s a reasonably good start, but I had no intention of finishing it on muslin. ??? Okay, moving on from there… 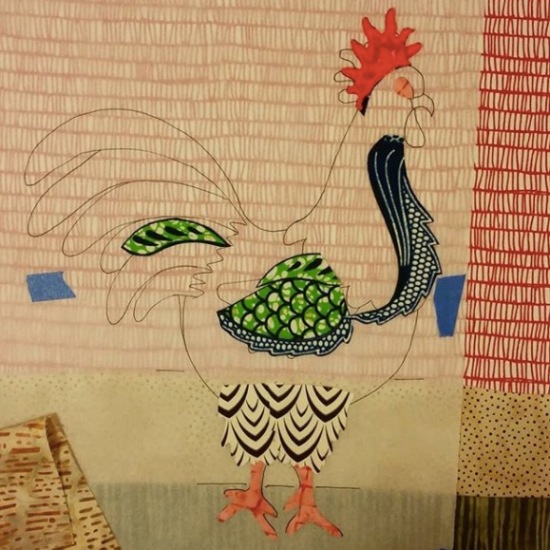 These pieces of fabric are not fused down yet. They’re just placed on top of the tracing paper sketch, which is stitched down to the background I’ll actually use. Again, procedurally, I have things to learn. But it’s coming.

My intention with the 100 Day Project was to spend at least 20 minutes every day on it. In truth, I manage far more than 20 minutes most days, and there have been a handful on which I probably haven’t spent that long. At this point I’m still exploring ideas and technique and materials. I watch videos and look up product specifications. I sort through my stash (again) and prep fabrics. I flip through books on appliqué and story quilts. I google photos for inspiration.

It feels very much like a lot of prep work and not much progress. A lot of thinking and not much doing. However, there is a lot I’m learning, though it isn’t very visible yet. What’s the hardest part? Maybe patience. That, also, is a good thing to practice.