Recently I’ve shown you a few illustrations drawn in EQ7. (See pictures here and here.) One of them was to become a sample for my upcoming medallion design class, and the others will be used to illustrate various ideas for the students. Here is one of two that I started with.

Consensus in comments was that the design was too busy and didn’t look maker-friendly. I simplified it by removing the piecing from the spacer blocks — see the connecting blocks between stars in the final border and between pinwheels in the middle border. I also changed two of the patterned borders to plain white.

I liked the simplified version, so I made it. 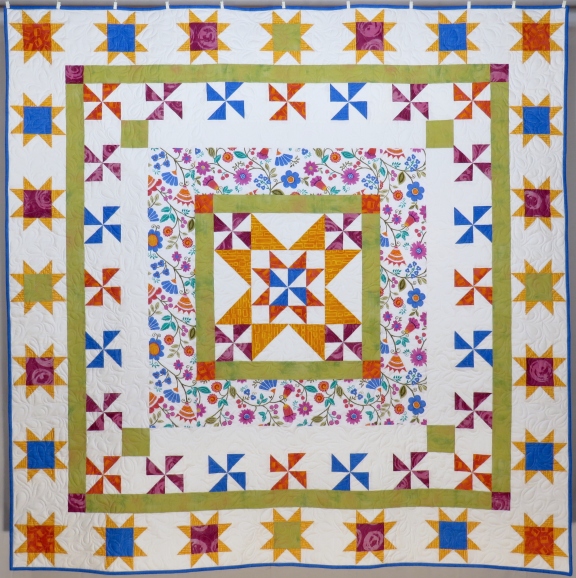 Even if I design a quilt prior to making, it almost always gets changed in the translation. Fabric simply doesn’t look the same as pixels. On this one, I found that the density of color and pattern in the center (visual weight) was too much as compared to the middle and outer borders. It was unbalanced. To fix the balance, I replaced the white in the illustration’s outer narrow border with green. As soon as I did that, I was happier with it. The binding of the strong blue adds punctuation.

I quilted it with a double teardrop design. The quilting is pretty dense, making the quilt less cuddly and soft than I prefer, but I like this look. The second photo is of the underside while it was still on the frame.

The quilt is named “Dizzy.” Between the spinning pinwheels and all the stars, as well as its overall brightness, it reminded me of the lightheaded feeling of standing up too quickly. “Dizzy” sounds better than “Lightheaded” though. 🙂

Just to round things out, here is “Dizzy” by Tommy Roe.