I’ve been working on lots of parts of my quilty life the last couple of weeks. The biggest project has been toward completing my Fire & Ice medallion quilt in red and white. In my last post I described my intended process for quilting it. That process included designing the stitching, , transferring the design to Golden Threads paper, and quilting a muslin mock-up. It’s DONE! I think the design is very pretty and I hope it translates well to the pieced top.

I was inspired by traditional Welsh quilting designs, as well as Gaelic/Celtic motifs. These photos give a sense of the design. Lighting is everything, isn’t it? 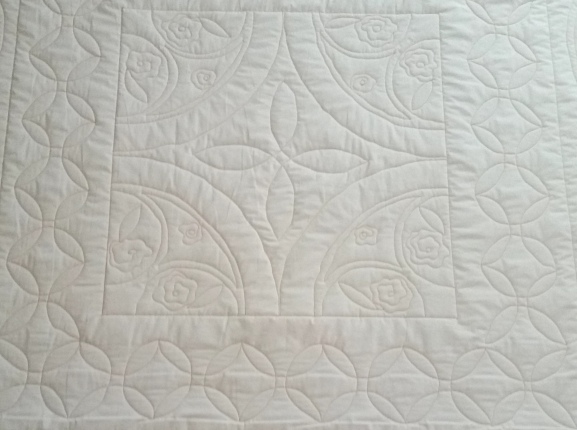 And these should give some idea of the process. Jim was a big help in thinking through drawing and transferring the design. First we spread the quilt top on the table and covered it with plexiglass. Jim put a clamp on either end so the plexi wouldn’t slide while we worked with it. We experimented with different markers and methods of drawing arcs. You can see the outer border in these two pix. 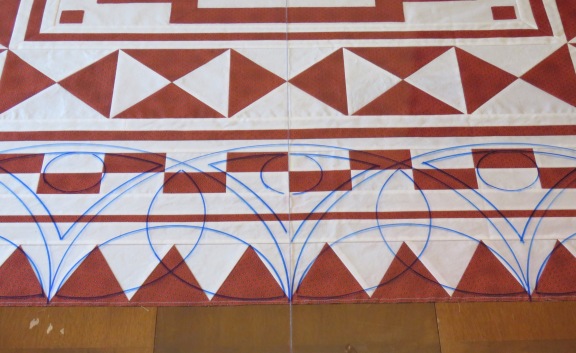 Once I was happy with the designs for the borders (outside border above, corner blocks, and the hourglass border,) we removed the quilt top and placed a piece of batting under the plexiglass. The batting was simply to put a light background under the plexi so the blue lines would show. Then I traced the designs onto the Golden Threads paper. 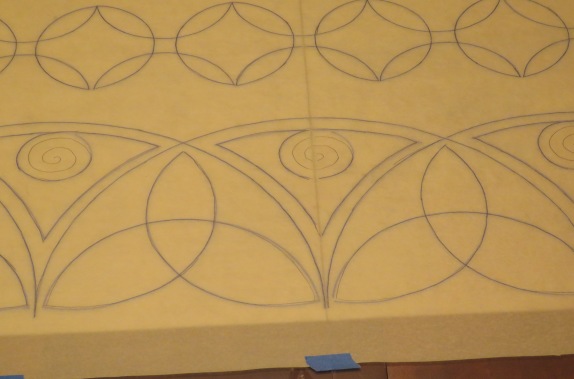 Each stapled stack of paper had the pencil tracing on top. I used a basting stitch and no thread in the longarm to punch the design through the whole stack. I made enough to do both the practice quilt and the real thing. One thing I found was that pinning the papers to the quilt made the paper warp and pucker. After a couple of times like that, I simply stabbed long pins through, clear up to their heads. There were enough of them to keep the paper from moving much, and the paper stayed flatter to the fabric.

The next two pictures show the muslin on the frame, after quilting the first border and also after removing the paper. In truth, it took as long to remove the paper as to quilt it. The paper tears away pretty easily, but of course you have to be careful not to stress the stitches too much. Also it comes off in big pieces and tiny shreds. I brought a vacuum cleaner in with hose attachment, and cleaned up the little bits with that. (I also vacuumed everything in the room once I was done, as I’m sure lots got away.) 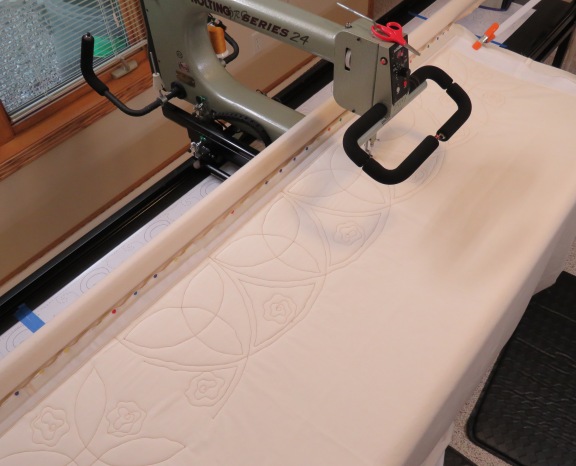 You can see by the picture above that the quilted lines are not smooth and crisp as they are in the blue marker drawing. I chose to do the spirals as roses, so that was intentional. As for the rest, the longarm is large and heavy and hard to maneuver smoothly. I am not experienced with rulers, so wasn’t able to perfect them that way. While I wasn’t thrilled with the look at first, I quickly decided to embrace the wobbliness. As long as it covers the quilt evenly, it doesn’t look like a mistake. 🙂

Next to do on this project is to load the real deal, change the needle, change the thread to white, and get started quilting. The actual quilting time is not huge, so I hope to have it quilted by the end of the week.

25 thoughts on “The Muslin Mock-Up”