The primary focal point of a medallion quilt is, and should be, the center. Because of that, it makes sense to begin there when designing a medallion. However, given my recent general lack of inspiration and motivation, beginning anywhere was worth doing!

After thumbing through some of my favorite books and other sources of inspiration, I finally decided on a center block for my quilt. I found it in one of my old blog posts, and it uses the format in the design below: 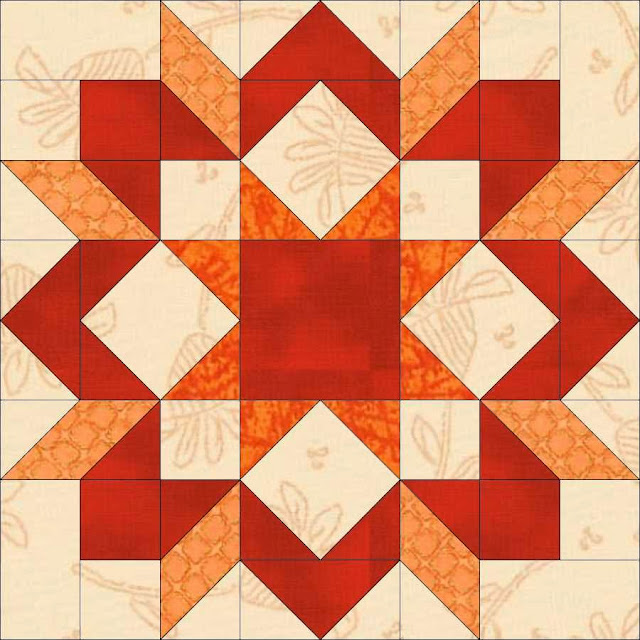 The block is a variation and simplification of a traditional block that goes by multiple names, including Carpenter’s Wheel and Dutch Rose. (Thanks, Nann!) The original version is centered by an 8-pointed star with 45º diamond points meeting at the middle (like a LeMoyne Star or Star of Bethlehem) and includes set-in seams. The style was simplified further with the recently popular “Swoon” block.

No matter. I picked a block. I chose fabrics. I re-chose fabrics and performed surgery when I didn’t like the color of green used next to the center patch. I made a center block. Here is the finished block.

And here are two really important things about a center block:

If you look at my old medallion quilts, you’ll find that very few have spectacular centers. Some have particularly UNspectacular centers! I use basic stars a lot, as well as variations on 9-patches. They are showy mostly because of being bold, rather than being fancy.

My block shown above is 28″ finished. Why? The fabric used in the very center is fussy cut around two flowers. To capture the look I wanted, it needed to be cut for a patch about 7″ square. The center patch is a quarter of the block width (7/28 = .25), and using a grid of 3.5″ per cell worked easily for rotary cutting. (Look for future post on re-sizing blocks.)

For proportions, I like a center block to be about a quarter to a third the width of the finished quilt. Given the size of the block, the finished quilt will probably be from 80-95″ wide. (It could surprise me and be smaller or larger than that, too.)

Overall proportion is important, but that can be faked, too. If you look at the block again, you can see the star points directing the eye outward. The diagonal lines within the design serve that way, too. Those shapes and lines (design elements) help to expand the visual size of the block. (See this post on center block considerations for more on expansive or enclosed center blocks.) In addition, choice of borders affects the appearance of the center.

I’m ready to begin borders now. What next? I don’t intend this to be a yellow-and-pink-and-green quilt. That means I need to start adding in other colors right away. But which colors and in what format? I don’t know! Join me on this crazy design-as-I-go adventure to see.