Nope, we’re at the beginning of the fourth quarter, and there’s a lot of time to make a difference. What adjustments will you make to your strategy so you end the year with a win?

(Remember when we were in high school and learned about “stream of consciousness” writing? I don’t usually write that way — it can be hard to follow. But it’s been a long time since I wrote anything new here at all, so we’re gonna go with it…)

After finishing four pieces at the beginning of August, and then heading out of the country for almost three weeks, I’ve been in a lull for both making and writing. It happens. And I don’t mind. The spell always breaks after a while, and I get revved up again.

One of my intentions this year was to make some quilts for the local VA hospital. My guild distributes some of our 200ish donation quilts a year there. They have a preferred size, approximately 48″ x 60″, and of course recipients are adults, so not all of our members’ contributions suit it. But I don’t much like making baby quilts or little kids’ quilts, as many people do. And with Son in the military, I’d rather make for the vets.

Last week I began by pulling all the dusky teals in my stash. To pair with them, I picked light fabrics with a golden or tan cast. Deciding on block size was … annoying. With 48″ x 60″, 6″ blocks work well (8 blocks by 10 blocks.) Note, though, that requires making 80 blocks. Also when making block quilts with an alternating block, I usually prefer odd numbers of blocks, such as a 7 block by 9 block layout. That allows the blocks to alternate in a balanced way.

Then there are the decisions about using a border or not, and if so, what fabric do I have enough of already in stash? Well, NOTHING. I have NOTHING in stash, to go with the teals, with enough yardage to make borders. Okay. No borders, just blocks.

Finally I decided on shoofly blocks to finish at 7.5″. With a 6 x 8 layout, the size would finish at 45″ x 60″, which works fine. That’s still even numbers, which affects the alternate blocks chosen. What works? Ones that have a diagonal line, such as half-square triangles. In fact, I considered other options but HST are simple and effective. I found a piece of toile just large enough (with some piecing) to make halves, and I pulled my old-fashioned rusty oranges for the other halves. (Some of those are pieced, too. I’ve gotten better at making the fabric work for me, as long as the area is enough. I CAN piece it together. I know how.)

The picture below is blocks, before being assembled into a top. My overall standard for quilts is pretty simple: would I be pleased if someone gave it to me? The answer on this would be yes. The toile in the HST is paler than all the other lights used. One of the teals is pale, but doesn’t stand out as living in the wrong quilt. One of my teals has as much bronze as teal, and the bronze is what shows most in them. That’s okay with me, too, as it doesn’t stand out, either. And the HST with their strong contrast give great movement. (That’s why there isn’t a balance problem when using them as the alternate, when using even numbers in the rows and columns. The movement and strong line create their own balance.) 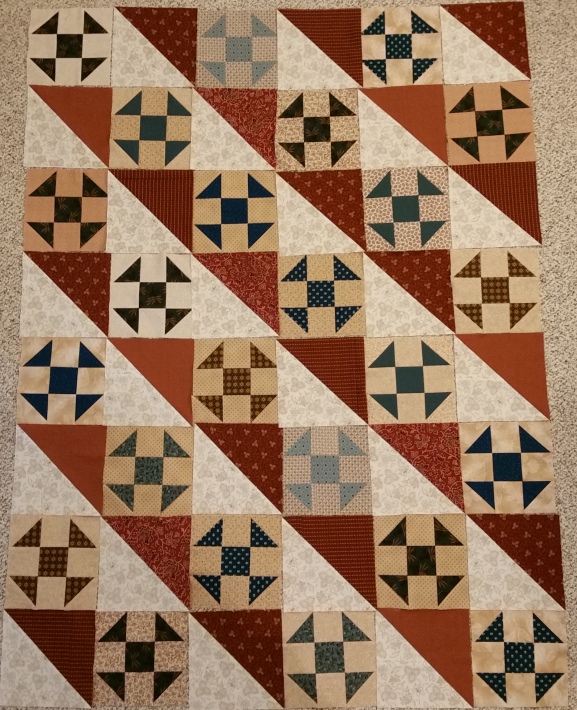 (Wrote that yesterday. I stopped at JoAnn Fabrics last evening before meeting a friend for dinner. Got the batting. Picked up three yards of fabric for the back. Had 50% off coupons for both. If this were really stream-of-consciousness, I’d go on about that, and about my favorite quilt shop closing soon.)

hmm… what was I saying about the fourth quarter? What else do you want to get done before year’s end? And how do you fit it all in? I’ve seen a couple of blog posts recently on that. One is from my friend Tierney at tierneycreates.com. She wrote about the seven habits of highly effective crafters, a crafty look at Steven Covey’s rules. It covers a lot more than getting projects done, but on that issue, the most relevant is putting first things first. In other words, decide on your priorities. What is most important is not always what seems most urgent. If there are things you want to finish by holidays, for instance, identify them now.

Lori at The Inbox Jaunt takes that a step farther. She recommends using a notebook to inventory projects. Once you know what you have, identify priorities and then list specific, small steps that need to be taken next, to move them along. (Do you quilt your own? Check Lori’s blog for seemingly unending resources for quilting designs and strategies.)

At this point, I need to think about what I want to accomplish before year end. That will give me a way to identify priorities.

What’s left on your making list for the year? Will you get it all done?