“It would be great to have a lap quilt with that soft stuff — what’s it called? flannel? — on the back,” my son said. We were using Facetime to visit with him. He was in his very small apartment on base in Oklahoma. Visible behind him was his bed, covered with the comforter I gave him when he was in high school.

When I made the comforter, I was just learning to quilt. It is designed as one enormous double 9-patch, in dark blues and greens. I filled it with a high-loft batting and then tied the layers with acrylic yarn.

The colors are pleasing, but its most important feature to Son is the flannel backing. As a senior in high school, he had his wisdom teeth removed. Jim took him to the dentist for the procedure early that morning, and then stayed with him for part of the day. Late in the afternoon, when I was away from my desk at work, I had a phone message from Son. Obviously drowsy from the medication, he mumbled about how much he liked the quilt, how warm and cozy it was.

He loves the flannel-backed comforter. And I saved the phone message until I left my job several years later.

But Son, above all else, is a practical man. So almost as soon as he said he’d like a lap quilt, he backtracked. “I don’t need a lap quilt in Oklahoma. Never mind.”

He won’t live in Oklahoma forever. In fact, in the middle of next year he’ll move to the Seattle area. And three or four years after that, it will be on to a different base and assignment.

So I made him a quilt, with flannel on the back. It is a buddy quilt, about 60″ square, big enough for him and a buddy (his fiancee) to snuggle under while watching teevee. At that size, it’s big enough for somebuddy to nap under, as well. 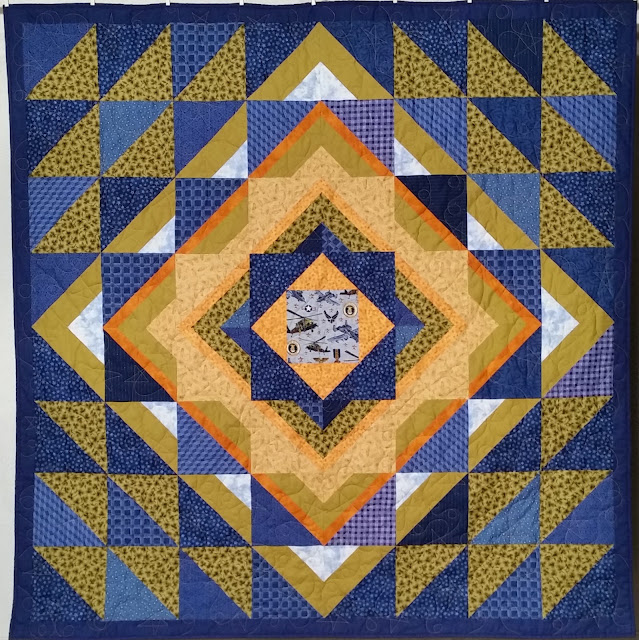 When I started it, I was inspired by the wonky half-square triangle quilts of Katie Pederson. Here are two pictures from Katie’s site:

Aren’t they amazing? But obviously I didn’t go this way. I have a hard time working “wonky.” As much as I love looking at quilts like these, I like precision in my piecing. After making three blocks, I was annoyed by the process and by the waste of fabric. So I made the outside corner blocks with regulation half-square triangles, and all the rest, except the center, as strip-pieced HST.

I worked all from stash, with the exceptions of the flannel backing and the narrow “containment” border around the edge, which also was used for the binding. Even from stash, though, I was able to build in a lot of symbolism, making this uniquely his quilt. 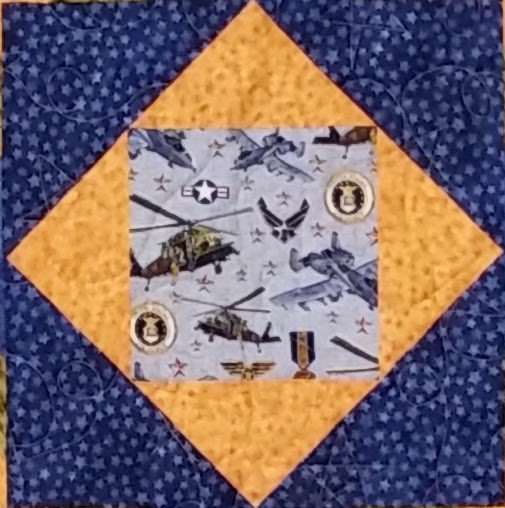 The center block is an economy block, or square-in-a-square. It is centered by a piece of Air Force logo fabric I bought a few years ago. Surrounding the logo fabric is bright dark gold and navy, both printed with very Americana stars. (See my tutorial on making economy blocks any size.) 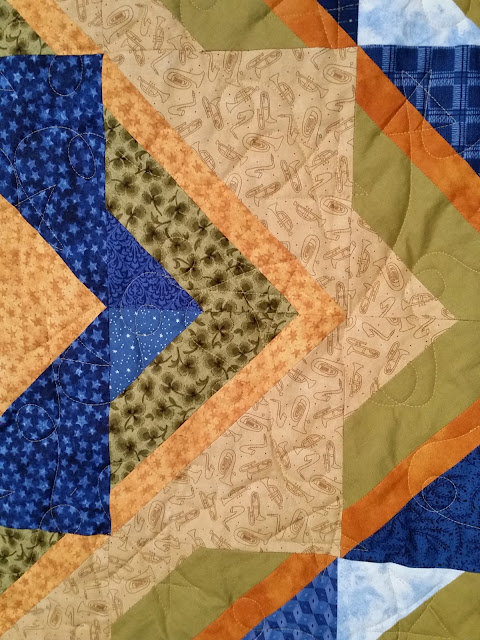 Besides that, you can see the shamrocks and plaids, signifying his Irish and Scottish roots. I added a piece of sky, because he is a pilot and will work in the clouds. And the musical instruments allude to his background as a musician, playing jazz saxophone in high school and college. I quilted it with free-motion stars and loops.

My original plan was to make this as a Christmas present. But it was very easy to execute and went quickly. Soon I realized I could have it done before Thanksgiving, ready to give him as a belated birthday present. When he arrived on Tuesday last week, he opened his present and was very pleased. I think he thought it should have a higher loft batting so it would be more like that fluffy comforter. But the flannel was the kicker, and he slept with it last week on his bed.

All in all, it was a successful gift.