TBT: Throw Back Thursday, if you’re not up on the acronyms.

I’ve been quilting about eleven years now. Most of my first quilts were for grandbabies, with a few graduation quilts thrown in for good measure. All of them were pretty simple, in comparison with what I do today. But they were great for learning some basics.

After I joined my local guild seven years ago, the complexity of what I did ramped up. An early challenge I took on was to work on a guild round robin. The service (donations) committee had the center of a medallion quilt and wanted volunteers to contribute borders. When finished, the quilt was donated to a local organization to use for fundraising. 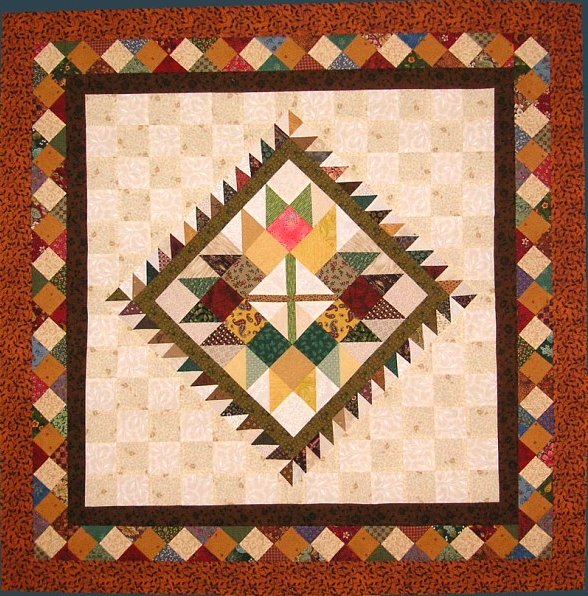 Impetuous me, I volunteered to do the first border. The center as it came to me is the maple leaf blocks, surrounded by tan and cream checkerboard setting triangles. I had no idea how to do the math for squares on point, so I estimated and came up pretty close with my dark gold and tan bead of squares. I framed that with the coppery brown print. In addition, I made several more maple leaf blocks, envisioning how they could be used in later borders. Then I turned the enlarged center, the leaf blocks, and a lot of fabric bits back in.

Unfortunately, I never got a photo of the quilt when completed. A later quilter did work in those extra maple leaves I’d made, which was gratifying for this still-rookie quilter.

Some of my best lessons came while working with donation quilts for guild. I was lucky to start with this one.

2 thoughts on “TBT — Guild Round Robin”