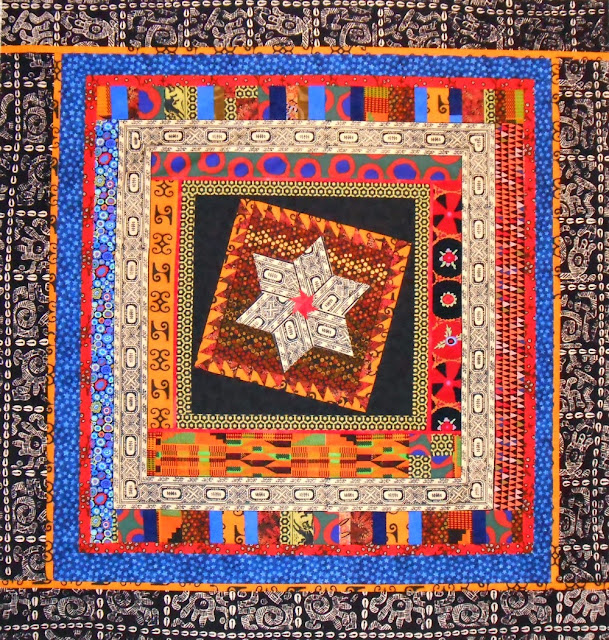 I’ve been working on this, off and on (and mostly off) for … a long time. I started with some beautiful African fabrics I bought at a quilt show (years ago). With those as inspiration, I found a number of other “domestic” prints. (Just how domestic our fabrics are is a matter for another post.)

The center star was the first part of this project. I built it, faced it with lightweight fusible interfacing, and appliqued it to the background. It is appliqued rather than pieced into the background to retain the stripe of golden dots across the top. Next I rimmed that with 1″ half-square triangles that includes an African print. And that is how it stayed, waiting patiently for me to begin again.

Maybe that’s when it started to scare me. This isn’t my usual style, though it IS my usual format lately, a medallion. At every step I’ve had to remind myself that nothing needs to be permanent. Any portion put on can be taken off again. It is not so precious that it can’t be changed. And so I framed the center with black, and tipped it off-square, and loved it. And it waited again until after I began the Medallion Sew-Along last fall.

Someday, somehow, a very odd geometric print appeared in my stash. Of citrus green on black, it features interlocking circles and angry cats. And it became the next frame on my slowly-building quilt top. I followed that with different fabrics on each side, separated from the center with a very narrow red line.

The same African stripe used to build the center star became the next border. At that point I wasn’t sure if it was done. So I did what I usually do: I asked someone else. My sister Cathie said “no,” not done yet. It still needed some heft to offset the darker center.

And I asked Jim. He said “it needs blue.” Blue? There’s no blue here! But in fact, there is a blue-purple in one border and touches of blues in another. He has not failed me yet, so I tried blue. Whaddya know, blue was the thing to brighten and strengthen everything already there. But blue all the way around? Too strong for me. So I used blue print on one side and stitched solid blues into an uneven piano keys border made from scraps. And I chose yet another print for the fourth side.

Busy! But … intriguing… To corral it all, I ringed it with red and black print, echoing the red star center and the red line used earlier.

One more line of blue, this time all the way around. It’s a tone-on-tone with stars, the perfect Americana touch to complement the African fabrics and feel. This quilt will be for a friend, explosive and stable at the same time. The stars are another hat tip to him.

The final border is another African print of black and cream, edged with the same brilliant orange found near the center.

I really had to talk myself through this. What was scary about it? Mostly the worry that if I “ruined” the African fabrics, I wouldn’t be able to replace them. Also, because it will be a gift, I want it special enough to honor my friend. The next intimidation factor I’ll need to overcome is quilting it. I think that will be less frightening, if only because the design is so busy, quilting will hardly show!

Thanks as always to Cathie and Jim for their encouragement and advice.

What’s the most recent “scary” project you’ve done? Why were you hesitant? Did you work through it? Were you happy with your results?

You can find Catbird Quilt Studio at Facebook, too.

20 thoughts on “Explosive and Stable at the Same Time”