Yesterday was our final class meeting. In five sessions over four weeks, my talented students produced some wonderful work. They are all experienced quilters, which made the task simpler for me. As I’d hoped, they were generous with sharing their own process and problems AND solutions, as well as constructive comments and ideas for the others.

Each of the students created a unique, design-as-you-go medallion. They all used a template for border widths, which I provided. Even with that limitation, their projects are strikingly different.

Here are some photos of their medallion quilt tops. Most are completed, and a couple are nearly done. We hope to get together as a group later in the year, when all the projects are quilted and bound. In alphabetical order: 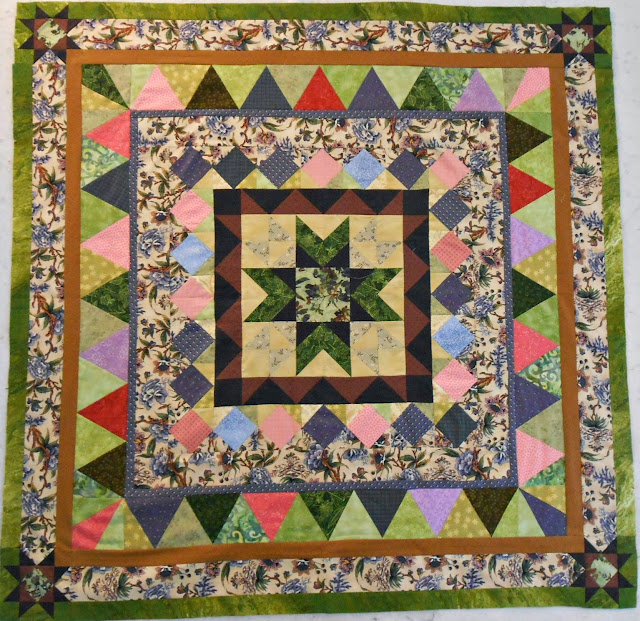 Barb’s completed top. The print in two borders was her inspiration fabric, and she used it well to find more colors. I called it “Where the Garden Meets the Woods.” 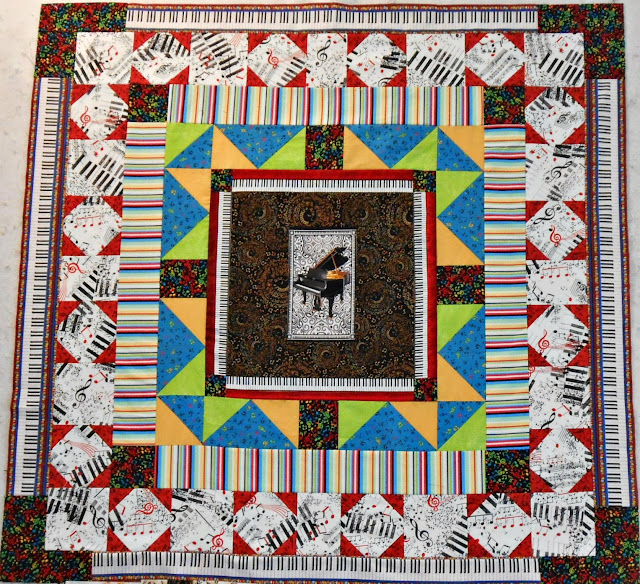 Karen A’s top, needs one more border. She began with the small panel with the grand piano. We were all delighted with the way she introduced more colors. The final border will have accents of the blue and green to extend them farther out. 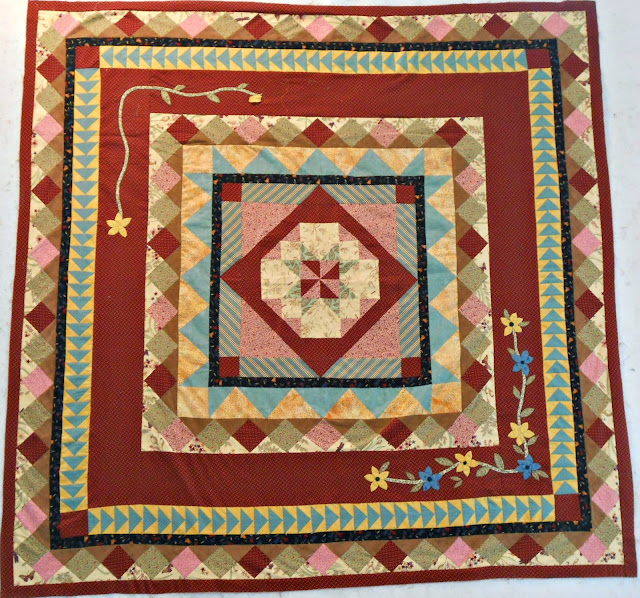 Karen M’s nearly-completed top. She has applique flowers to add in the upper left, similar to lower right. Her fabrics came out of an abandoned project, with a couple of new additions. I love the tiny flying geese, and her repeated squares-on-point borders. 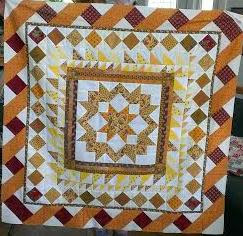 Robin wasn’t able to join us Thursday, but she emailed this photo. She has two more borders to do in her almost-all-yellows quilt. 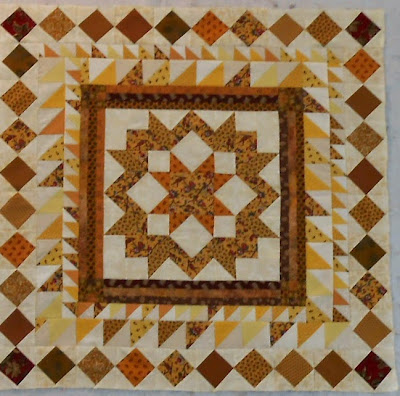 Here’s a bigger view so you can see Robin’s inner sawtooth borders. Note how she used two sizes and wrapped them differently. LOVE this effect! 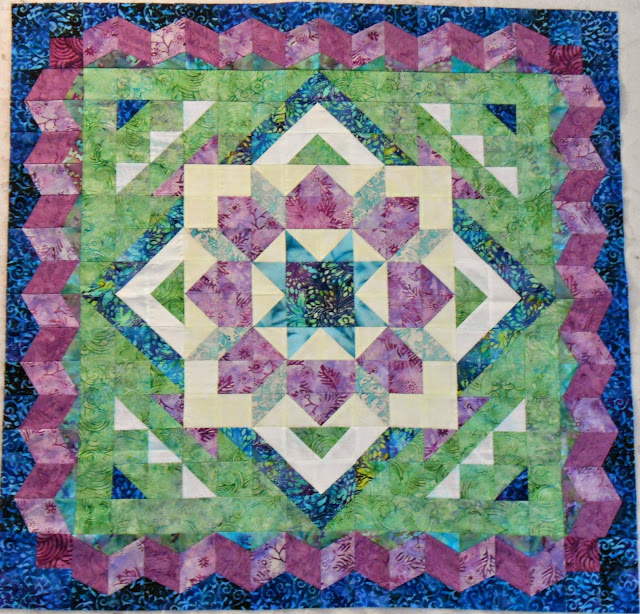 Sarah made another top I’ll show you below, so this one is a wall-hanging, and as large as she’ll make it. Note the diagonal piecing around the center block, which gives an effect of block set on point. 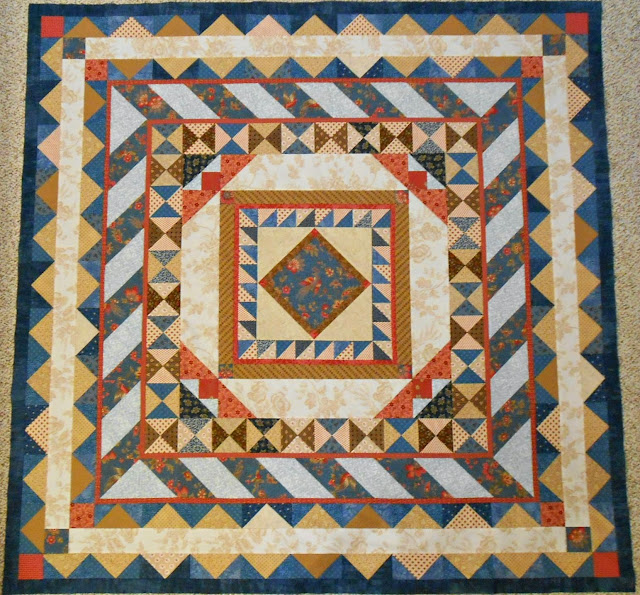 This is my traditional take, as you may have seen it before. I’ll use a double-pink binding to echo the lines of double-pink in the center. 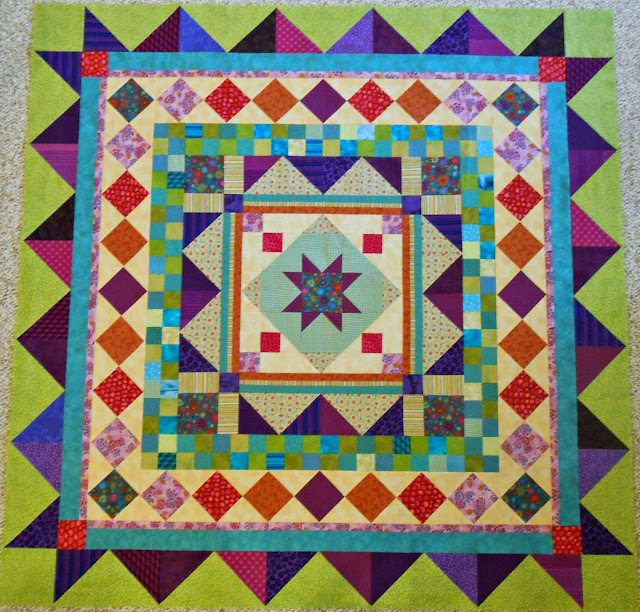 This is My Bright Idea. I’ll have more to say about process for both of mine, once they are quilted.

And because this is so spectacular, I also want to show off Sarah’s other medallion. She came to the class at least partly to move along this wonderful project. It is a family tree she created — her own design — for her grandmother. The economy blocks around the outside will serve as signature blocks for family members. 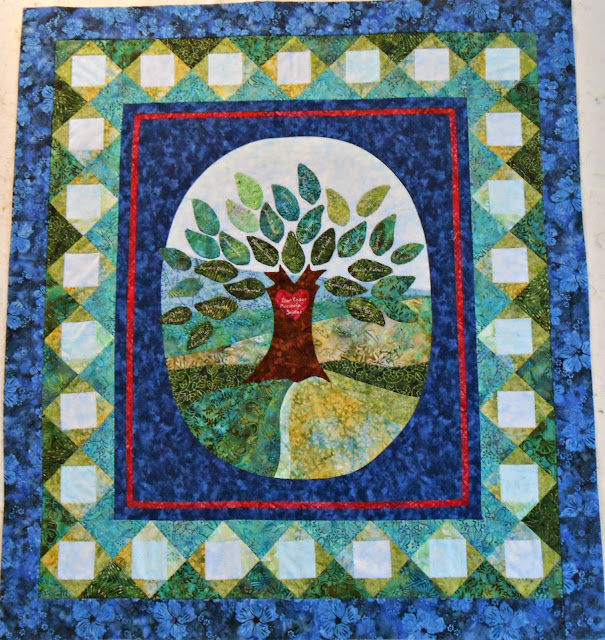 She’ll bind it with the same rosy red you see around the tree. This is a picture of love.