or motivation? Not sure…

I’ve been rather silent lately. Last week Jim and I went to Oklahoma to see our son. Son is in pilot training at Vance Air Force Base, and he recently finished another phase of training. There was a small ceremony to announce what training track the students were assigned to for their next phase. We were able to enjoy some time with him and celebrate his accomplishments.

Once we came back, I focused on preparing for a presentation on the Underground Railroad quilt code. (Blog post coming soon!) I delivered that Wednesday and had a great time. Of course, probably a hundred hours of prep went into a presentation that didn’t last even two hours.

Now I’ve turned my attention to prepping for a class on medallion improvisation. In the class I’ll teach many of the same strategies and design concepts I discussed with you in my Medallion Sew-Along.

My motivation, inspiration, and energy for real-world quilting (and other-worldly blogging) seem to have dissipated. In the meantime, I am having fun designing to get ready for my class. So far I have eight EQ7 illustrations to show how very simple units can work to make an exciting medallion quilt.

Here is a design I worked on this morning. Jim says it reminds him of Easter with its springtime colors. 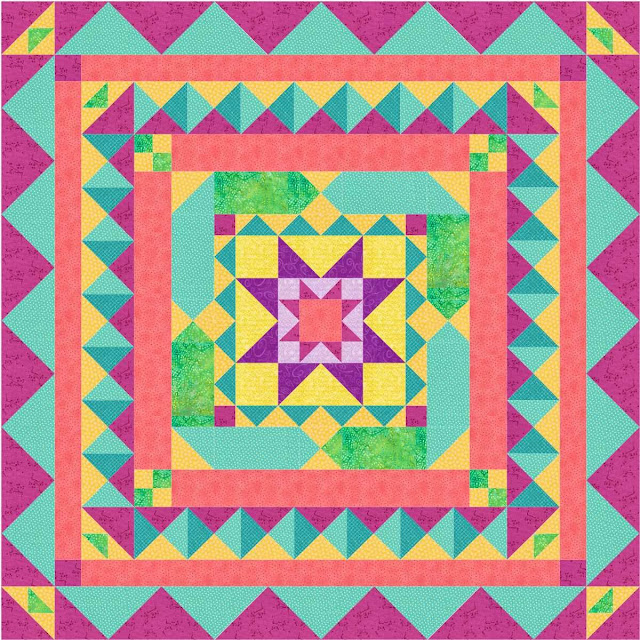 Designing with software allows some experimentation that’s hard to do with real fabric. The only resources you need, besides EQ, is imagination and time. You can test colors, shapes, value differences at the touch of a button. The time involved is a tiny fraction of what it would take to make several versions with real fabric, deciding only afterwards which was your best version. (I do that, too, sometimes. But it is time and labor intensive!)

As I’ve played with these designs, I often use complex shapes or ideas first and then simplify them. I trashed one whole “quilt” this morning before making this. It was too busy and didn’t benefit from the complexity.

What do I like about the one above? The star-in-a-star center is easy but effective. Stars generally work well, in my opinion, because they draw attention to themselves and then point it back out to the borders, helping to unify the whole. The first border of teal flying geese against yellow continues the direction outward.

I was just playing when I made the next border, with its green and turquoise twisted ribbon. The centers of each side are hourglass blocks. The salmon-colored border with 4-patch corners comes next, repeating the salmon from the star center. Also, having the border unpieced except corners gives the eyes a rest, which is important in combination with the complex border that comes next.

The next border actually looks more complicated than it is. I’ve used this several times and am not tired of it yet. The teal, turquoise, fuchsia, and yellow edge is made from hourglass blocks. Pairing the teal and turquoise, basically different values of the same color, gives an illusion of depth. I also like how the fuchsia points, inward and outward, create a frame of their own, similar to how the two borders of salmon do.

I liked that illusion of dimensionality so much, I decided to draw the final border again, incorporating it there, too. Which do you like better? The one above, with a “flatter” final border, or the one below with multiples shades for depth? 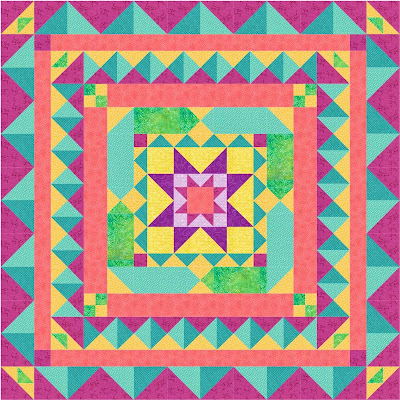 Here is one case where making it a little more complex helps, I think.

On both versions, the dots of green continuing to the outside corners provide an accent and repeat the green in the ribbon border. In the same way, the yellow extends from the background of the center star clear to the edges.

Repetition of shape and color, some unexpected elements, and illusions of depth, help to make this design successful.

Thoughts? Comments? Questions? I’d love to hear from you.

12 thoughts on “Searching for Inspiration”