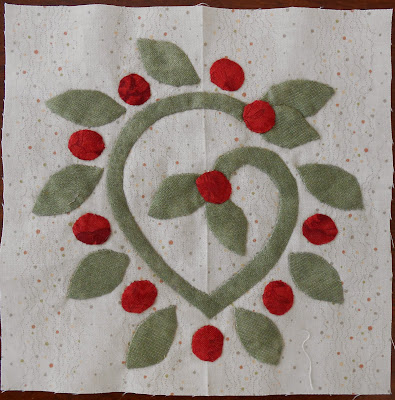 My friend Janet made this beautiful block. She is in my small quilt group. As you may remember, last year my group did a round robin project. This year we are again, but we’re doing mini-medallions. The finished quilts must be no larger than 18″ to meet the rules of our larger guild’s annual challenge.

Because of the small size, only four people will work on each quilt. Each owner began their quilt with a center block. After that, three people will add borders, with the total width of the added border no more than 2″. I’ve added the first border to Janet’s. Her appliqué is lovely and traditional. I wanted to honor it to highlight her work, but also setting the piece up for later borders.

While it would be natural to continue with the reds, greens, and creams, I thought about some color problems I’ve had with my own medallion quilts. More than once I’ve backed myself into a corner by using too few colors in the center. I was afraid if I stuck with those, it would be hard for later borders to broaden the spectrum. While sometimes a quilt is intended to have few colors, this one doesn’t need to.

My first thought for a new color was cheddar. In the early 1800s, chrome yellows and cheddar oranges often were use to accent red and green appliqué quilts.

I also wanted to do an appliquéd dogtooth border. One reason to appliqué rather than piece it is because appliqué is a traditional method for making the spikes. Take a look at some of the amazing, toothy borders in this blog post by Barbara Brackman.

Another reason is simply because I haven’t done one this way before, and I have long wanted to try it. Brackman’s post also includes instructions. I did make a test piece this way, and I also started a border with appliqué. But after beginning, I decided I wouldn’t be happy with the outcome, and that it would take me far longer to complete than my time available.

So I began again.

Part of the challenge was in the size of the block. Its finished measure is 5.75″. Quick, tell me what size piecing works easily with that…

I could have added a spacer strip to take the center to … what? Taking it to 6″ would require a spacer finishing at 1/8″. That would be really hard to do. And larger numbers don’t work especially well, either, unless I took it all the way to 7″. I’m constrained to a maximum of 2″ width. I didn’t want to use most of it on a spacer unless I had a really great fabric for it, rather than just a place holder.

I decided on a sawtooth border, to maintain the idea of the spiky appliquéd dogteeth. If I arrayed them outward, I could leave a gap in the middle of background fabric. The design would maintain its symmetry. The border is 1.25″. With four teeth, they cover a total of 5″. That leaves a gap of 0.75″. It’s a gap-toothed quilt!!

(I actually think the sawteeth create a crown encircling the heart. That’s a much more romantic notion than gap-teeth…)

I picked the background fabric for its blend with Janet’s background. In addition, it has a small blue ring in the print. Though it is subtle, it allows another color avenue, which I took advantage of.

The corner blocks are slightly darker than the background fabrics, giving a little more weight and easing the transition from the bright cheddar teeth.

Finally, I found a cadet blue in my stash. The print has red, green, and gold. The style complements the traditional heart. I added strips of that to finish the center at 9″. That should make easier work for the next quilter. 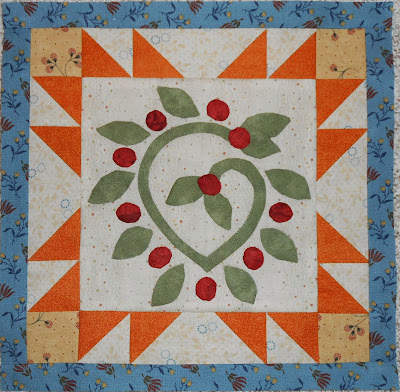 What do you think? What ideas would you consider for the next border if you were the next quilter?

6 thoughts on “Round Robin Challenges”