While working on developing the Medallion Sew-Along, I thought about what makes a successful design. I haven’t studied design formally, but when we talk about quilt design, we usually talk about elements such as line, color, value, size, shape, and texture. And we talk about how those elements are used, including principles such as balance, repetition, contrast, movement, and unity.

I decided to take a look at a few of my quilts and consider what design aspects work well and what don’t. (All are my original designs.) I welcome your thoughts on them, too. Don’t worry — you won’t hurt my feelings! We all have different taste. But besides looking at mine, take a look at some other medallions, either online or in books, and really think about why the design does or does not appeal to you. 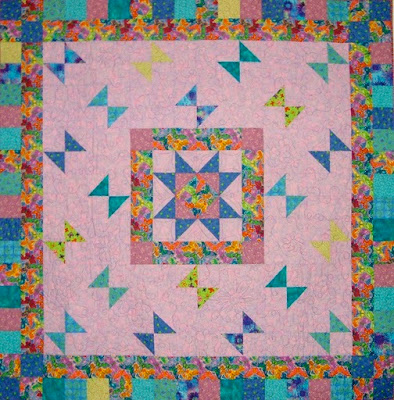 One of my earliest quilts. I designed it. 72″ square.

As the caption says, this is one of my first quilts. I found beautiful, bright butterfly fabric and went from there. What works: the butterfly blocks create movement and unity with the focus fabric. The colors contrast well with the background. Colors are balanced across. What doesn’t work: it’s a little clumsy looking. The squares in the pieced border are simplistic and might look better if they were half-square triangles. This also was very early. I based the design on a picture, but it isn’t a copy. What works: strong color contrast gives a graphic punch. The star points framing the center star emphasize by repetition. The striped border includes all the colors used. What doesn’t work: I dunno. Aside from my beginner’s skills, I really like this. Not sure I’d change anything if I made it again. 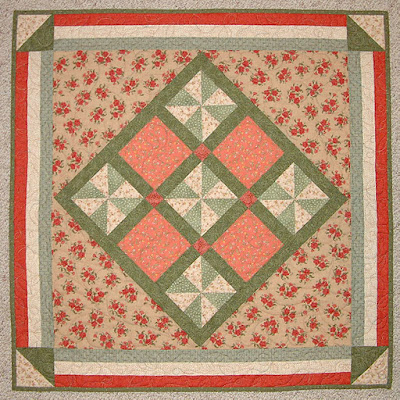 A wallhanging for my daughter, using fabrics and colors from her bed quilt.

What works: it has color cohesion. I like the pinwheels in the center block and how they add movement. What doesn’t work: The proportions are not pleasing. The border is too narrow to stand up to the center. The pale fabric in the corner blocks seems dull. Overall I don’t like it much. Again, it was an early piece, so in that context it’s fine. But I wouldn’t make another like this.

What works: I love the center and the graphic interplay of color, value, and line. All angles here are 90° except the setting triangles for the center. Using the on-point setting gives it interest. What doesn’t work: the red border is somewhat too narrow for the proportions, as is the outer plum border. 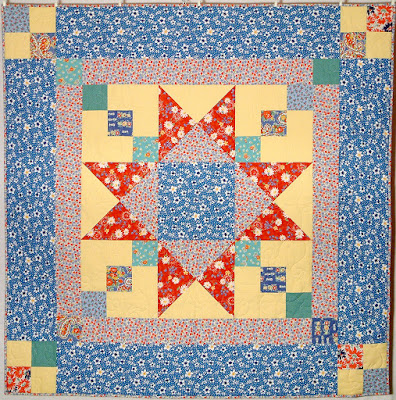 One of the “siblings” quilts, for Jim’s oldest brother. It is a lap quilt and uses some feedsack fabric. 2012.

What works: even though the fabrics are not all feedsack period, they have the same feel. The fabric in the center square of the star is used for the outer border for repetition. The center is very bold, but the weight of the darker borders balances it. What doesn’t work: the inner border of the small print is a reproduction fabric, but still doesn’t seem to be the right thing here. A wiggly stripe or something more geometric would have looked less busy. 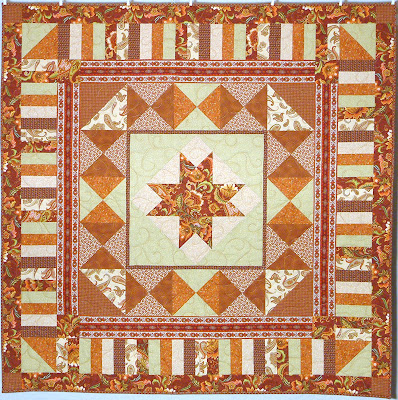 One of the “siblings” quilts, made for Jim’s sister. It’s a lap quilt. The piano keys border is for her husband, a pianist and composer. 2012.

What works: it gives exactly the feel I wanted. I used paisleys to be a little exotic for my sister-in-law, and piano keys for her husband. The narrow border around the center defines edges while creating a spacer for sizing. Using the pale green in the center-of-border hourglasses extends the setting triangles, past that hard line and breaking the surface. I like the alternating darker and lighter hourglasses, which give a sense of depth. What doesn’t work: I really like this quilt but there are things technically wrong with it. There isn’t enough value contrast between the center star background and the pale green setting triangles. The first border of hourglasses is large compared to the center — the center star was only 12″ and the hourglasses are 6″ blocks. The striped fabric of the next border looks better in person than in photo, but its style is a little off, too. More works than not, so I think overall it was a success. 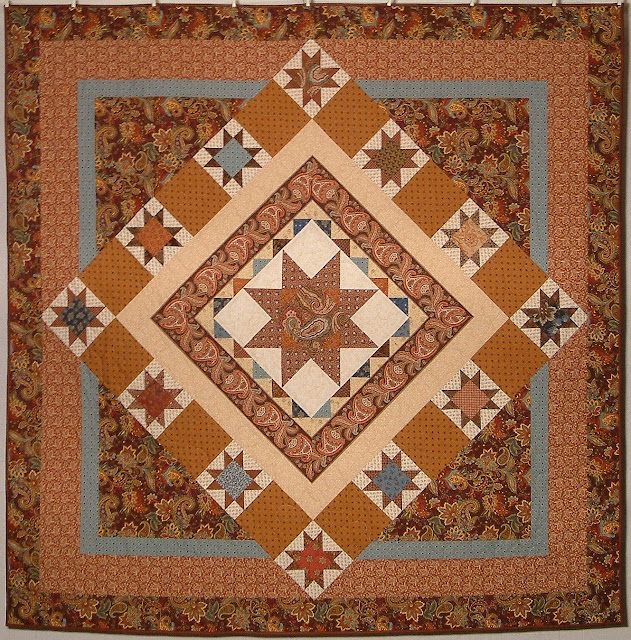 What works: the center star finishes at 15″. Enclosing it in flying geese and then the dramatic border stripe lend much more importance to it. Allowing the large on-point center including the stars border to break through the setting triangles makes an illusion of the center floating. But the bold print stands up to the center and creates balance. The use of blue with the browns, rusts, and golds is a little unexpected. What doesn’t work: the tan spacer border is a little broad and out of proportion. I could have improved that by splitting the tan with another line that was just a little darker and mitering the corners. On the whole, I love this quilt. 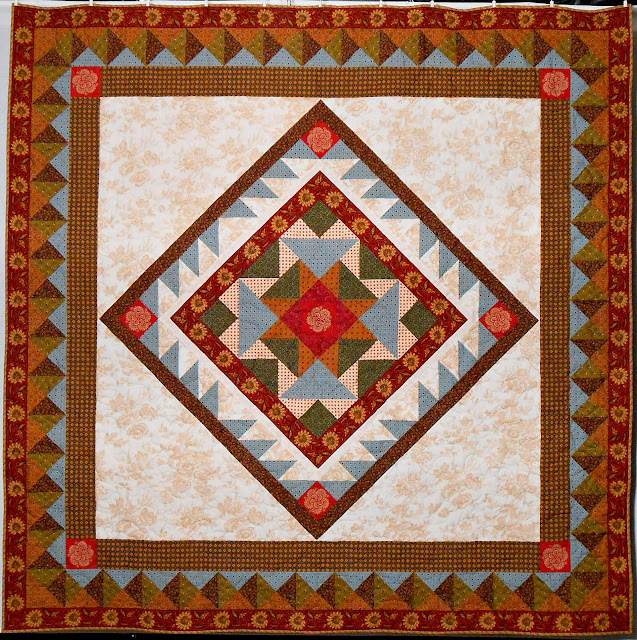 What works: This is a very simple design, made in a hurry. The simplicity is part of why it works, but the great floral border stripe and pieced hourglass border give the illusion of something much more complex. Repetition of the medallion print used in the very center, and the similar floral motif in the border stripe, create unity. Also the use of foulard prints in most of the other fabrics give a consistent and masculine feel. I wasn’t sure about using the pale toile as the setting triangles, but I ended up loving it. What doesn’t work: … everything about this works for me. I think this is one of the best things I ever made. 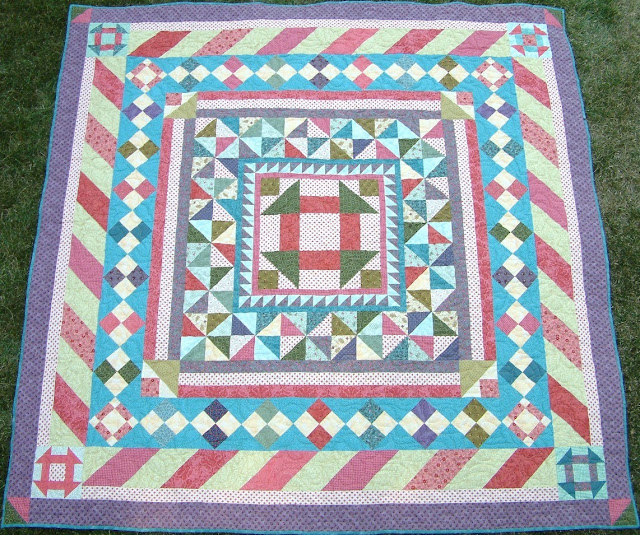 What works: the center block is relatively small at 15″, but the narrow half-square triangles border, set off by frames on both sides, makes the center more important. The broken dishes border and the candy stripes border both give movement and contrast. Use of the puss-in-the-corner blocks for the corners of the turquoise (middle) border allow the bead of yellow to continue all the way around. What doesn’t work: there is no dominant color, and while I like that, technically it isn’t typical design. The corner blocks in the final border seem out of place to me. Maybe no corner block there would have been a better choice. Really, though, I love this quilt.

When you look at medallion quilts, what design aspects do you notice most? Color? Shape? Balance? Or something else?

11 thoughts on “A Look at Some Medallion Quilts”